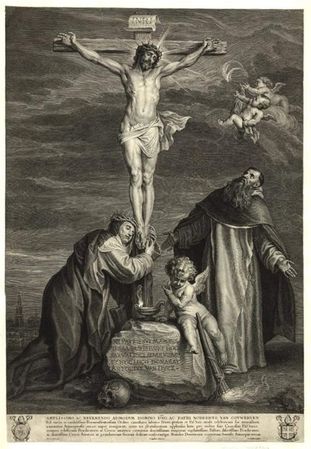 I see in the sun that, when we are come in the world, we have espoused the Cross in the company of Our Lord.

Marrying his Cross, Jesus has contracted an alliance all shiny: He has contracted by its own sufferings, then He [is] transfigured with the joys He receives from His Father in His eternal reign.

After He contracted this alliance, Jesus commands and directs all at His will, more for love than for severity.

I see, in the sun, that even before He had experienced the pains of the Cross, Jesus had felt them on all parts of His divine Body. But He separated the pains of love: He kept the cruelest pains to Himself; He gives us Love.

He felt the depth of His union with the Cross to His soul, He felt it from the top of His head to the soles of His feet.

In the first union contracted by Jesus with the Cross, we see only sufferings: contempt, injuries, derisions, blasphemies, the saddest and most poignant martyrdom. This first union continues to exist in His soul, but it dissolves into a second which is a thousand times richer and more abundant.

The second union, which is of joy, of hope and of glory, begins to explode at the foot of Calvary, but only in the eyes of the heavens, because it is only felt by a few souls.

In this second union, radiant lines of love escape from all the wounds of our crucified Saviour, under the most miraculous forms.

I see, in the sun, that Jesus, in His love, reserved the shine of His glory for a while where almost the whole world no longer agrees about the Faith and the marvels which work in us upon the Cross. He reserved this heavenly glory for the moment when, with the falling away of the Faith, everything would collapse, be lost…

This second union seems so close that the sun throws out a shard of light, its celestial flickerings.

This second union brings to an end all of the torments of the first, called sorrowful.

At the beginning, this union will allow some pains to escape which will not even be felt in front of the wonder which will explode. This second union will be done with such gentle rapidity, that one marvel will not wait for the other.

I see that this second union will be the Great Blow and the Great Marvel. I see the mysterious manner which will operate the change of things, from outside and outside us. The Lord will be in charge of directing everything, of driving everything. It will remain as a doubt and an uncertainty to believe if it is really the light of the Lord. No light will knock on the door of hearts where we are sheep: from this side, there will be no movement. On the side of those upon which the Lord has fixed the charge and the duty to watch over the whole flock, this light will not “lamp” much…

LINKS:  The See of the Cross   The Few Faithful   Contemplation   Your Home Oratory   St. Michael Prayer