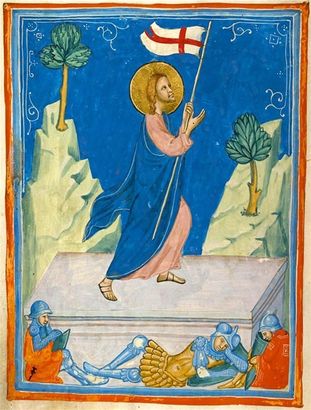 The Cherubim opens the Golden Book, the rays of which send forth their radiance towards the earth. I read:

“My Divine Will will exend Its brilliance over the world. This brilliance is My call for people to come and take refuge within the gaping wound of My Heart. Justice is resounding in My ears: The appointed hour is not going to tread for a long time on the degrees of mercy.”

“My divine disposition is that, within a very short time, the Roman Church will get acquainted with the form of its burial; but It will rise again. The Church is going to be a sepulchre, a tomb of silence and forsaken state.

-- “Get prepared to attend the funerals of the See at the Center, which is shaking, being built on the abyss.

“Prepare to attend the funerals of the one who is the support of the whole Church, the one who has all enlightenments in His power because of His authority of Holy Father.

“My people, I do nothing else than forewarning. The Apostle of the Church (Pope) will cover the road to exile, prosecuted by hatred and vengeance on the part of those who put the Kingdom of France to death. They are going to dip their hands into the blood of those victims who are sacrificing Me every morning.

“Happy are those who will have faith and sufficient firmness to die rather than losing their baptism.”

The Cherubim closes the book up, on the Lord’s command, Who utters this wrathful word:

“My children, rest in My peace. I am going to prepare a shelter for you. Henceforth, time is up. I will shelter you under a clear and bright sky, but the sun will soon darken its rays. The signs of My Justice will cause death to the plants on earth. The green meadows will produce no fruit: torrents will turn dry: not one drop of water. Sand will be burning. Such a punishment is awaiting the surroundings of the place of the Cross, in the South.”      (10 January 1882)

For those of you who have this book, there is a smaller prophecy immediately afterwards, which seems to indicate Pope Pius IX.

This prophecy, however, is about Holy Mother Church in our time as the result of the exile in 1958 of Pope Gregory XVII: “The Apostle of the Church (Pope) will cover the road to exile”.

The next attack is the murder of the holy and truly consecrated Priests: “They are going to dip their hands into the blood of those victims who are sacrificing Me every morning.”

A truly Roman Catholic Faith will be attained only by those who are given the grace to learn and follow the Catechism of the Council of Trent and keep away from the diabolical antipopes and their novus ordo church of darkness and its many associated groups (sspx, fssp, neo-catechumenal way, etc.): “Happy are those who will have faith and sufficient firmness to die rather than losing their baptism.”

If the true Papacy is not there, then that is not the Roman Catholic Church!

In Marie-Julie’s prophecies, plants are a reference to baptised souls who keep the Faith intact.

But without the true Priests and true Holy Sacraments, instead of spiritual life, there is “death to the plants on earth.”

Those who keep the Faith will be sheltered by God “under a clear and bright sky”.  They will know the Faith and, through their prayers and sacrifices, they will stay in communion with Holy Mother Church in this time of exile.

These people of Faith know that the Church “will rise again.” They are firm of Faith because Jesus Christ is their God. Their exile is lived out in “green meadows”.

But without True Priests in communion with the Papacy in Exile, there will be no Holy Sacraments, so there will be no graces for conversions: “The green meadows will produce no fruit: torrents will turn dry: not one drop of water.”

However, we have hope in the promised triumph of the Papacy and of Holy Mother Church.

Another book, Father Herman Bernard Kramer’s The Book of Destiny tells how our martyrdom in the coming persecutions will be the seed for the conversions of our loved ones and other souls.

In a preface to Chapters 11 to 14 of Saint John’s The Book of the Apocalypse, Fr. Kramer (pp. 240-250) discusses this phenomenon that was first seen in the Early Church, where martyrdoms become the seeds for conversions.

The two prophets come into these days of plagues (such as COVID-19), and this time of the pouring of the sixth bowl is also referred to as the Second Woe.

Truly excellent reading for the comfort that it affords and the breakdown of the events we are facing.

A Most Blessed Easter to all this Anno Domini 2021.