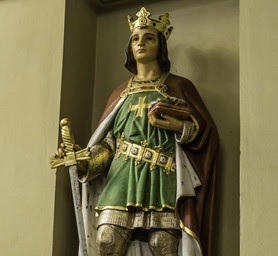 “The Saviour’s banner will not see blood running, but it will see blood already shed and the soil drenched with Christian blood.

“My adorable voice assembles together My illustrious and generous fighters. As of old, in various circumstances, My voice has chosen true and generous warriors.

“The man of faith who suffered and kept hoping in the depth of his exile, will arise, before years, as a shining bright lightning. He will await, on French soil, the coming of the army victorious over fear-struck enemies, under the dark sky.

“In My designs, the Saviour slumbers in exile, bent over the lily about which his mind has dreamed so much. Under a pure sky studded with stars, he will bring forth triumph to My temple and it will rest upon My Heart.

“Tears will run flowing upon earth, but Heaven will reward so many sufferings with the joyous solicitude of the true soldiers of the Cross. My people will devote themselves to My glory, supplied with the arms of the Archangel who promised to lead them.

“The enemy will oppose the triumph of the illustrious conqueror. His armies will thirst for the blood of those My glory is calling forward. But Heaven will strike them blind, lightning will strike them mercilessly.

“It is to quite a distance from the throne stained by the guilty man, and blemished over again by men still more guilty than he, that I am going to lead, under a cloud of triumph, My elect, on this French land where the enemies swore they would put to death the Saviour of the kingdom, Henry of the Cross. His name is written down in the golden book.”

This prophecy focuses on the graces that come from suffering.

We Roman Catholics must, for instance, fight the masonic enemies by themselves at first, enduring the worst of their battling without the Great Monarch to lead their numbers.

In fact, this prophecy would indicate that the bloody battling has just finished when the Great Monarch arrives, so that his army sees “blood already shed and the soil drenched with Christian blood.”

This prophecy then turns to a description of the suffering of true Roman Catholics who have also endured in exile.

The person of true Faith will withstand decades of faithlessness, as if living “under the dark sky”, will have “suffered and kept hoping in the depth of his exile”.

What is the true Roman Catholic hoping for?

With Saint Michael the Archangel leading the Church Militant, true Roman Catholics will stand up and become “a shining bright lightning” that will drive away the universal clouds of dark faithlessness.

Yes, the sufferings will be great: “Tears will run flowing upon earth”.

But our sufferings will purify us, making us holy and our fears will be extinguished: “Heaven will reward so many sufferings with the joyous solicitude of the true soldiers of the Cross.”

In fact, this prophecy assures the Faithful of final protection against God’s enemies who seek to kill us: “Heaven will strike them blind”.

Their actions will be stopped by the Sacred Truths taught by the One, Holy, Catholic, and Apostolic Faith.

Truth will burn their consciences: “lightning will strike them mercilessly.”

However, they will not repent and ask God for forgiveness, so their battles against the True Faith will be a torment to them, and their rejection of the Truth will take away their peace.

This prophecy names the Great Monarch, calling him God’s “elect,” … “the Saviour of the [French] kingdom,” and finally:  “Henry of the Cross.”

His exile has been painful. He will spiritually be given the grace to unite his sufferings to the Foot of the Cross, and thus he is referred to as “Henry of the Cross” by the prophecies revealed by Marie-Julie Jahenny.

His inner peace comes from his purification, from this gift of holiness. Truly, the French Monarch’s example will bring great joy to all true Roman Catholics and to the Roman Catholic Church: “His name is written down in the golden book.”

Let us pray to endure our sufferings, to accept them, and to embrace them as coming from God, who loves us so much and wants our salvation.

Note: The photo is of the sainted Monarch of France, Louis IX.