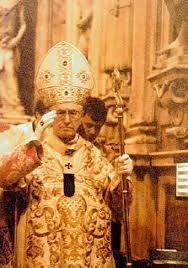 The Apostle Peter goes on saying:

“This land will turn out similar to that of the homeland of the children of the Queen of Heaven; everywhere it will become the place for martyrdom and execution. The temple in which I myself sacrificed Jesus, the adorable Victim, will be transformed, before those days of sorrows reach their middle point, into a barrack in which God’s enemies will execute their victims. The blood of men consecrated to God will stain the inside of that palace of the Lord, and the dwelling-place of His own person. That land where I evangelised, which I seeded with the word of the Gospel, that land will turn out a desert.

“Let us pray, friends and brothers in the priesthood. Let us pray for the victim who will have fallen heir to Pius IX’s charms. Under a new Pontificate, Heaven will sing to the glory of that illustrious Pontiff.

“On this day,” says Saint Peter, “when Heaven knows a glorious celebration of my beautiful feast day – and the earth has a share in it – it is still while retaining peace that the Church will sing my glory, in jubilation; but already Her maternal heart feels oppressed in a painful expectation of tears and, above all, of weakness.

“The Church will know of suffering before She is entirely closed. She will undergo the direst outrages, not to mention those of a large number of Her children who will deny Her, by reason of their attachment to promises on the part of men who will break their own word; that will break anything that can be found of the most sacred; who will treat the Son of God with the most abominable words. The number of those souls, forever separated from God, so to speak, will rise beyond the three quarters.”

This is a painful prophecy for our consideration. It is very painful for we who love Christ’s Own Bride: the One, Holy, Catholic and Apostolic Church.

In terms of the timeframe of this prophecy, it seems that we are already here, that these are the news headlines of our day.

Already at the time of this prophecy, Holy Mother Church’s “maternal heart feels oppressed in a painful expectation of tears and, above all, of weakness.”

Let us consider the players so that we may be able to reflect on where we stand.

First, there are the heroic and saintly consecrated souls who are martyred in Saint Peter’s Basilica, in “[t]he temple in which I myself sacrificed Jesus”; that is, where Saint Peter himself offered up the Holy Sacrifice of the Mass.

There have been so many rumours about satanic sacrifices coming from the Vatican City, and from inside the Basilica of Saint Peter.

The martyrdoms are shocking, but all souls who are sacrificed by diabolical agents will receive immediate entrance into Heaven. This is a happy thought!

Whose martyrdom was occurring there that night? One day we shall know all.

Since “everywhere … will become the place for martyrdom and execution” the diabolical takes hold worldwide.

Then we have (toward the end of this prophecy) the mention of the “more than three quarters” of persons who pretend to be Catholics, but are not. They are going with the diabolical changes and they notice nothing is amiss.

No doubt many of them join up to be “religious” and poison the young, old, and everyone they can, with their false doctrines and their lusts, which result in the murder of innocence and the death of Faith.

Those who are led astray and join this “more than three quarters” will not be led by the Truth. They like sinful Rome which has become the haunt of devils (Apoc. 18:2).

It suits their inclinations.

Then there is made mention of a Pope who will be kept hidden from everyone’s sight. This Pontiff is known as “the victim who will have fallen heir to Pius IX’s charms.”

While this meaning is unclear, and seems to indicate some agreement to simply hide out of sight.

We may think of Pope Gregory XVII, who never let it be known about his Pontificate in Exile, although the hints were there, such as His use of the royal “We”.

What do we know about this Pontificate in Exile?

It seems to be able to pass on the Papacy, for this prophecy tells us that “[u]nder a new Pontificate, Heaven will sing to the glory of that illustrious Pontiff.”

So, despite the criticisms of today (made perhaps by those who are themselves weakened by self-pity or some such bitterness) there will be a formal recognition of Pope Gregory XVII’s holiness, of his greatness in His Pontificate in Exile.

What a marvelous day that will be when “Heaven will sing”. Surely, this can only mean that Pope Gregory XVII will be canonized—oh, to be there!

But our lifetimes today seem to point out the many roles to be had through suffering: “The Church will know of suffering before She is entirely closed.”

There will be “the direst outrages”.

These damned men and women will go after the holy innocence and peace of children, as we have witnessed for several decades now: “[these men] will break anything that can be found of the most sacred”, such as the trust between a child or youth and his/her priest.

Is it any surprise that with a widespread turning away from holy vows made to God, that the effect will be “a large number of Her children who will deny Her, by reason of their attachment to promises on the part of [these] men who will break their own word”.

Are these sins against holy innocence the reason humanity so quickly and angrily turned to women’s rights and the murder of babies in the womb?

Yes, sufferings from “the direst outrages” have been borne by babies, children, their families, communities and nations, all leading to the almost-constant suffering that we know today: no true Sacraments to be had.

No absolution of confessed and abhorred attachments to sins. In this way, sins pile up against sins, becoming monstrous.

Without Sanctifying Grace from the Holy Sacraments, we can truly say that the Roman Catholic Church “is entirely closed”.

This Exile in the Desert means that we faithful only have the Holy Rosary and our Brown Scapular (and other sacramentals) to wear.

There is no sanctifying grace from the Holy Sacraments, except in those of Baptism and Holy Matrimony, the two sacraments which laypeople can give, one to another.

This is a heavy, oppressive heat, this life in the desert…

Let us look to July 1st, the Feast of the Precious Blood, and ask for the forgiveness of our sins through Christ's Precious Blood before we leave desert life.

Deo gratias! May God’s Holy Will be done now and always. Amen.