THE SACRED HEART HAD REVEALED IT TO MARGARET-MARY 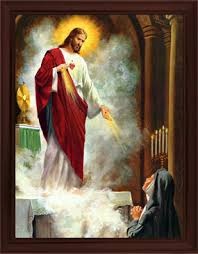 “… During those massacres, during the cold months, the earth will turn into a blood flood, after the same manner as it turned into a water flood in the times of Noah. All those who are not to be found within the ark of salvation of My Heart are going to perish, just like in the time of the flood.

“I was also telling her (Margaret-Mary): ‘I Myself will make the choice: I will have appointed the true comforter of My people and of the Church: the one who is going to rebuild My temples burnt down under the violence of a great civil war, although it is not to last long. I cannot label [it] otherwise than “Civil War” that war to which France will be given over.

“My children, how much my servant’s soul was saddened at My words of such a desolation! She answered only with a sigh: ‘Lord, I shall pray on behalf of that France, in the abode in which Thou wilt have introduced me with Thee.’

“My children, how much my servant’s soul was love; so few hearts serve Me faithfully. Even within the cloisters, I meet only with indifference, forgetfulness and weakness. I am complaining bitterly. If good Christians are cowardly to such an extent, how are the culprits going to be who want to destroy and even overthrow My eternal Kingdom.”

“Great scourges and calamities will suddenly arise over France which nothing will be able to stop or mitigate. A countless number of deaths are going to pass over France, such as the world has never seen, and diseases which will remain unknown. It is mostly in the Center [Paris] that the mortality will launch its scourge. It will come and strike even up to your parish, My children, but fear nothing: My Heart will be an abode for your protection.”

--I recall that, Divine Heart of Jesus.

“My children, those who wage war against me for more than sixty years, a war which has doubled within the past eleven years, are not going to be struck by the scourge of the great number of deaths. I am awaiting them after another manner, yet a more wrathful one…

“I forewarn My people: following those several scourges upon France, the first of which are not far distant and shall be followed by a large number of others, I forewarn you that a day will be found – and it is already appointed – when there will be little sun, few stars, and no sufficient light for a step to be taken out of the homes, the refuges of My people.”

In recent weeks, we have seen a universal attack against religious orders who have historically educated and brought up children, and especially indigenous children, through the burning down of church buildings, both Catholic and protestant.

In this week’s prophecy, the result of these attacks is prophesied:

“… no religious house will be left standing in France; not a single cloister will escape from the oppressors of that time. A large number of slaughters will take place, …”

Sadly, the cause of these attacks against abuses and misconduct are due to a universal falling away from prayer on the part of consecrated souls.

Christ says “I am complaining bitterly” as He contrasts Saint Margaret-Mary’s loving heart to the apathy, already evident in 1882, when “so few hearts serve Me faithfully. Even within the cloisters, I meet only with indifference, forgetfulness and weakness.”

Yes, it is no different with consecrated souls or lay persons. When we do not pray daily, when we do not engage in that daily spiritual battle, then we are opening the door to our human weaknesses and to the influences of evil.

Have some souls consecrated to God sinned against the innocent children under their care?

It is important to recognize the effects of not maintaining a prayer life by considering the more than 100 years of growing cold indifference among those consecrated to God (a situation which also affects laypeople).

This is an era of a lack of prayer, of a universal turning away from God: “Degenerescence [degeneration = breakdown] in faith takes place everywhere.”

And due to this indifference that is condemning souls to Hell, God will chastise us to bring us back to Him.

In fact, He is chastising us already, with “[g]reat scourges and calamities”.

The reality of this time seems to be indicated by this week’s prophecy:

“A countless number of deaths are going to pass … such as the world has never seen, and diseases which will remain unknown.”

As we are in the middle of the first of these “unknown” diseases, we should stress that Christ is telling us that there will be more than one such disease to suffer through.

This does not mean that the diseases come from God alone, but merely that God permits them as a punishment, as a means to bring us back to relying on Him, back to a life of prayer and divine intimacy.

These diseases can still be of human invention (a biological weapon).

But God can make good come out of evil.

In fact, Christ tells His faithful people to “fear nothing: My Heart will be an abode for your protection.”

We must take confidence in His promise and rely on His Sacred Heart!

Recall the ten plagues of Egypt and how God’s faithful people, the Israelites, were not hurt by the plagues at all. They only affected or bothered their enemies.

Likewise, we also can remain in peace.

But Christ does forewarn us of a single day of Darkness which will come before the 3 Days of Darkness:

“I forewarn you that a day will be found – and it is already appointed – when there will be little sun, few stars, and no sufficient light for a step to be taken out of the homes, the refuges of My people.”

We will look at this one day of Darkness next week, as it seems to follow these diseases.

Editor’s note #1: In this prophecy, notice that our homes are our refuges, and they continue to be our refuges during the single Day of Darkness.

It is important to place crucifixes over all exterior doors and Saint Benedict medals and Miraculous medals at all windows. Remember the blood of the first-born lamb over the door frames of the faithful Israelites in preparation for the Angel’s Passover. This world will be cleansed by fire!

We must not neglect our reliance on God. It is important to protect one's refuge with these powerful sacramentals.

Editor’s note #2: It is time to gather the medicinal hawthorn leaves (Craetagus monogyna) to air dry in preparation for the tea that can break up phlegm and can dry up respiratory congestion.

Our Blessed Mother tells us:

“You will pick up the leaves, not the branch.  Even dried up, they will retain their efficacy.  You place them in boiling water, leaving them for fourteen minutes, keeping the container covered, so that the steam remain inside.  From the very start of the attack by the disease, that remedy will have to be used three times a day.

“On the Monday after my Assumption, you will offer those leaves of thorn bush to me, and you will pay attentive heed to my words.

“My children, that disease will be strong in Brittany.  The thought of God will be much lesser around there . . . The disease will produce a continuous sickness on the stomach, vomiting.  If the remedy is taken in too late, the touched parts of the body will turn out black, and through the black part there will be traces turning to pale yellow” (p. 270, Prophecies of La Fraudais).

These leaves need to be offered to the Blessed Virgin Mary, for her blessing, on the Monday after the Feast of the Assumption, which this year falls on August 16th, 2021.

Let us pray for each other to be timely in making our preparations, to stay hopeful, and to reach holiness by a tireless striving for divine union through our daily prayer life.

Sacred Heart of Jesus, have mercy on us!