Part 2: Excruciating Complaint of the Saviour 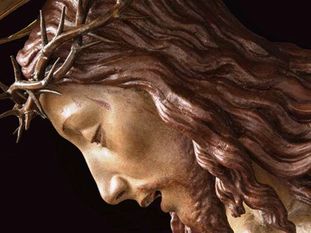 “I created all hearts for loving Me. I granted great powers on earth; I sent representatives of My dignity; I entrusted all My priests, all My most intimate friends, with My priesthood. O My people, pay heed to My complaint, to-day. If I do complain that way, the reason is because I know of souls who will be compassionate to My sorrow.

“From the height of My glory, I see eagerly joining that religion, culprit, sacrilege, wicked, in a word that religion similar to that of Mohamad… I see BISHOPS joining.

“I see them walking in, their head held high, their heart without any reflexion for Me and for the other souls crying in their desolation. At the sight of those bishops, many, many of them… --ah! My heart is wounded to death! – and following after them the whole flock, the flock in its entirety, and without any hesitation rushing headlong into damnation and hell. My heart is pierced to death just as at the time of My Passion.

“My sorrow is still greater, because I was, then, dying for the salvation of all men, while, at present time, I see more, more than half of them being lost. So few are left that, were I to tell you their number, your hearts would remain disconsolate.

“Others will march along, following after those French Bishops. O France! you have become the heir, inheriting that devotion to My divine Heart; you had been predestined to that favour. Nowadays you betray Me; you throw Me out of your heart. You are banishing My Heaven forever; you are acclaiming the overtaking of a reign which it will be difficult to disgrace. Because before they come out again, its roots will have grown deep.

“Oh! My priests! Many among them will not be the last ones to walk in the footsteps of their Bishops in France. Young priests will join that abominable establishment, for the larger part, and without any sorrow. O My people, you are on the eve of it! That religion will spread around in all directions.

“I will be turned into an object of horror for the major part of My people. No younger child will enjoy the happiness of relishing in the delights of the Church’s faith. All youth will be infected and will soon fall into a putrefaction the stench of which will become intolerable.

“For earth sake , I will lose a large number of My priests; the faithful will die in their faith, rather than joining that infamous religion.” [to be continued next week]

Christ’s priesthood continues to be the subject in part two of this prophecy.

He “granted great powers on earth” to His priests, for the conversion of souls.

Christ did this for the conversion of the nations.

As He says to Marie-Julie, “I created all hearts for loving Me.”

Those men whom Jesus Christ has truly called to the holy dignity of the priesthood are His “most intimate friends”.

We who have known truly ordained priests know how they loved all unconditionally, as if Christ’s own Heart had become their hearts.

But satan has inspired jealousy and deep hatred for Christ’s Church in men and women.

There is an eager infiltration which Christ calls “culprit, sacrilege, [and] wicked”.

The Sacred Heart of Jesus breaks as bishops join, their “head[s] held high, their heart[s] without any reflexion for [Christ] and for the other souls crying in their desolation.”

We are desolate because we must die in our sins, without holy absolution.

We are desolate because without the holy sacraments, the light in souls is extinguished, and we watch with horror as family members fall away from daily prayer and the Faith!

And what is still worse for we faithful, these enemies have multiplied: there are “many, many of them.”

These wolves clothed as shepherds lead priests and entire dioceses of people.

Their fall from grace takes so many souls with them: “[F]ollowing after them the whole flock, the flock in its entirety, and without any hesitation rushing headlong into damnation and hell.”

And how heartbreaking, Christ saw this painful apostasy while He was dying on the Cross:

“I was, then, dying for the salvation of all men,… more than half of them being lost.”

And where are the faithful?

“So few are left that, were I to tell you their number, your hearts would remain disconsolate.”

And the diabolical spirit of rebellion from the French Revolution is still with us, oppressing us!

The majority in the world continue to follow that communistic rebellion.

It has been so over two hundred years, and the minds of people have been totally turned away from their Creator:

The masses of disbelievers “are acclaiming the overtaking of a reign which it will be difficult to disgrace. Because before they come out again, its roots will have grown deep.”

In Marie-Julie’s time, they were “on the eve of it” but in our day we are living it!

And yes, there is a one-world religion that worships man over God: “That religion will spread around in all directions.”

The youth, who have never known a life of Faith, are particularly vulnerable:

“All youth will be infected and will soon fall into a putrefaction the stench of which will become intolerable.”

So we must help the children to turn to Christ Our Lord for help when they begin their daily schoolwork, as well as when they face particular challenges.

We must teach by modelling what it is to live in God’s Love for us, to rejoice in it and find our peace in it.

The children must come to realize that God’s Love for us is embodied in Christ’s Sacrifice, and that this proof is why we rely on Him each day.

Happily, we can be part of that one consolation which Christ received as He was dying on the Cross:

“[T]he faithful will die in their faith, rather than joining that infamous religion.”

May we be worthy to be among them!