In the Direction of Amiens 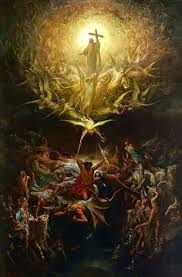 Note: Marie-Julie is looking at a crucifix which is surrounded by three Flames. Each Flame speaks to her. In this prophecy, the second Flame is speaking.

“The Lord is exhausted with the offenses of the earth. By way of a terrible chastisement, He is going to render the three quarters of France sterile in fruits of His Providence.

“A ruin, willed by His inescapable Justice, will fall back upon France, both catholic [universal] and ungodly. Everything, which, in France, supplies almost the whole people with its treasures and comfort, all those wealthy palaces where are produced the profits of the nation, all of that the Lord will destroy with a terrible chastisement, under the form of a landslide.

“All of those tall buildings which are part of France’s bread, will crumble down. God is going to take by surprise all those who are working without thinking of Him, neither of His power which supplies everything on earth.”

The focus this week is on the current physical chastisement which has begun, in all appearances, with the volcanic eruption of the mountain on La Palma Island, part of the Canary Islands.

Watching Spanish news, since the Canary Islands are a territory of Spain, these facts have been gathered:

--the volcano has been erupting for almost a month now and shows no signs of stopping!

--the lava is voluminous, producing new landforms once it reaches the Atlantic Ocean

--poisonous gases were already extending to Cuba and Puerto Rico within a few days of the eruption (Are your eyes bothering you, are you producing thick yellow phlegm, is breathing more difficult?).

“the Lord will destroy with a terrible chastisement, under the form of a landslide.”

This may be referring to the collapse of a large part of the island of La Palma, which is of unstable structure under the ocean.

It has been calculated that this collapse (landslide) would cause destructive tsunami activity which would reach the East Coast of North America.

From this week’s prophecy, it also seems that there will be destruction to some European shores as well, since France is mentioned.

And the earth will shake with violent earthquakes when this landslide will occur:

“All of those tall buildings which are part of France’s bread, will crumble down.”

Other volcanoes have also been in a continuous eruption:

--Mt. Kilauea on the island of Hawa’ii

With all the ash in the air from these volcanoes, the effect must be one of global cooling, which appears to be happening, and quickly:

More immediately, though, there will be violent earthquakes from the volcanic activity, which may trigger other volcanoes to begin erupting as well.

We are already witnessing signs in the sky.

There are observable irregularities in the moon and the sun:

--Around the time of the full moon, and for a day or two afterwards, the moon can be seen to be wobbling (moving) in the sky: side-to-side and up-and-down.

--Moon movement sightings have been reported.

--The sun is having many emissions, similar to volcanic eruptions (but of fire), which send out heat and radiation.

--The sun is looking more erratic in terms of the light coming from it: unsteadiness in brightness, more radiation in the heat.

Surely, we shall also witness the stars falling as the Apostle John was shown in the Book of the Apocalypse.