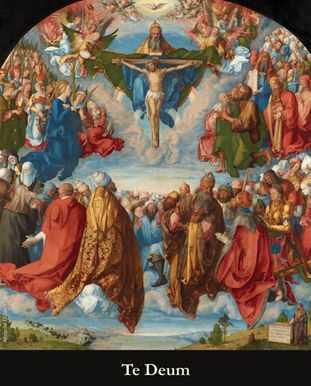 Archangel Raphael opens the Cross up. I am trembling: I will have to read what is written inside. I come closer. The letters look like traced with blood. “This is Jesus’ blood” says the Archangel, “who wrote His blessing on behalf of His children.”

Brittany, you preserved your fidelity for Me. You devoted yourself to the defense of those who are persecuted. You have not been afraid to declare: I am Christian; I will preserve my faith, if need be, even to the last drop of my blood.

Brittany, you are sealed with three secrets (left unknown even until now) which I shared with My Immaculate Mother: be prepared to receive them. You will move upwards, all by yourself, as soon as the defiled feet of the wicked will come to desecrate your faith. You will be strong enough not to allow even your first edges to be trampled underfoot.

Brittany, you are the one I have chosen. You are like predestined. You alone will uphold faith; alone you will uphold yourself. You will be bordered like with an iron grate: nothing will be able to step inside your borders.

Brittany, never have you been acquainted with the secret of the alliance I contracted with you ever since you have been called by that name of Brittany. You are the one who will display your courage, when the King’s call will be made heard. As a victorious army you will march on to encounter the one I miraculously gave to save the one who is perishing from shame.  (February 22, 1878)

These first four writings revealed by the Archangel Raphael are Christ’s “blessing on behalf of His children.”

Prophecies given to Marie-Julie Jahenny such as this week’s, make one wonder if Brittany is the spiritual dwelling with the Holy Trinity and Heaven’s court—in other words, the true Roman Catholic Faith of the Saints coming through these times.

Let us consider some points:

“Brittany, you preserved your fidelity for Me”: the implication is the opposite, that many did NOT preserve the Faith of their baptisms.

“You have not been afraid to declare: I am Christian”: here there is an implication of a time of persecution of the True Faith and of Christ’s followers.

“I will preserve my faith, if need be, even to the last drop of my blood”: the suggestion is that there is a time of fear, of a threat that must be overcome by reliance on Christ alone, even unto death. (This certainly applies to today’s choice between getting abortion-tainted “vaccines” and trusting in God to bring one through the terrors of unknown diseases).

The celebratory tone of the words of the first writing could be said by Christ Our Lord as He crowns His martyrs of our present time—the wonder of it!

Can it be possible for us who are without Priests, that we will be made ready for Eternity through the shedding of our blood for Christ?

What a great gift this would be!

As to the time frame, these writings seem to be in the near-future-to-a-later-future because “the King’s call” (4th writing) has yet to be heard. The King has yet to step forward to declare the battle.

In the Second Writing we see that the true faithful are “sealed with three secrets” and will receive them at an appointed time.

When the persecutions come to each one of us, when the noose is being tightened (less possibilities for escape, for a normal life) then the true faithful will find a way to a safe refuge “as soon as the defiled feet of the wicked will come to desecrate your faith.”

In this time of hardened (altered) hearts, this refuge will more than likely be among friends who have not compromised the true Faith.

Sufferings endured for the love of God will purify souls.

These persons purified by heroically standing up to trials will be indomitable: “bordered like with an iron grate: nothing will be able to step inside your borders.”

And, yes, the true faithful will be the ones to respond “when the King’s call will be made heard.”

Christ blesses His true faithful with courage: “As a victorious army you will march on to encounter the one I miraculously gave”.

And what is the goal?

The exiled Papacy needs to be saved.

The King and the faithful will be successful in acting “to save the one who is perishing from shame.”

This poverty of the exiled Papacy and the exiled Priesthood has been painfully borne by us all, but God’s King (and ours) will be given the Divine graces to bring the Holy Father and the Holy Priesthood back to their former glory.

Come Holy Ghost, fill the hearts of Thy faithful. Kindle in them the fire of Thy Love and they shall be created and Thou shall renew the face of the Earth!