Only Heaven Will Come to Our Defense 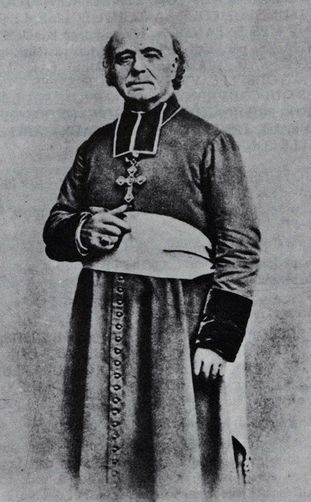 This week’s prophecy is given to Marie-Julie Jahenny by the soul of the deceased Bishop Fournier, whose diocese was half of Nantes and up to include Blain and the little hamlet of La Fraudais.

This holy bishop was convinced of the authenticity of the revelations given to Marie-Julie:

“My children, says Monsignor Fournier, I see only Heaven to be in a position to come to your defence against those foreign enemies, ambitious and greedy for the treasures of this land which is your homeland.

“My children, I do not see a father’s heart to repel those cruel hearts who will rush raging from different directions, to borrow, if it were possible, even from my own diocese which belongs to Brittany. I will plead with Heaven to spare many evils, many a victim; but the heart of those men will be left insensitive, hardened and inflexible in their ideas.”

This week’s prophecy speaks about an actual invasion of foreigners who are “ambitious and greedy for the treasures of this land which is your homeland.”

Over recent years we have seen France, and indeed much of Europe, filled to overflowing with invading foreigners.

When this editor was in the U.K. in 2008, French police had been unable to stop approximately 2,000 illegal immigrants from climbing over a fence in Calais, in northern France. It was reported that these 2,000 foreigners had disappeared into France.

It is of note that the holy bishop, a Saint in Heaven, refers to these illegal immigrants invading France as “foreign enemies”.

They are enemies because they want to impose their false beliefs and so they attack the Roman Catholic standard of life in western cultures: places of worship, laws, and the very fabric of western societies.

Sadly, Bishop Fournier’s statement: “I see only Heaven to be in a position to come to your defence” indicates that all nations allied with France will be facing the same crises and will not be able to send their troops to help France.

And yes, French troops have been dealing with daily terrorist threats since 2015, when the Parisian editor of a weekly satirical newspaper, Charlie Hebdo, was beheaded and eleven of his staff shot to death by two armed islamists, in retaliation for printing a comical cartoon of the false prophet mohammed on their cover page.

This editor noted the same defence measures in 2017 and 2019 in Britain and Italy, as well as France. And most assuredly they are still in place today.

Bishop Fournier refers to these foreigners as having “cruel hearts who will rush raging from different directions”.

But the real essence of Bishop Fournier’s prophetic message is the lack of true bishops to stand off these attacks:

“My children, I do not see a father’s heart to repel those cruel hearts who will rush raging from different directions”.

In other words, there are no spiritual fathers, no bishops left in France (or elsewhere in other countries) to stand up to the attacks.

There are no true bishops any longer to even defend and prevent the “borrow[ing],… even from my own diocese [Nantes]”.

This borrowing refers to the takeover of Roman Catholic churches and plazas.

And while the Saints in Heaven will beg God to “spare many evils, many a victim”, the fact is that God has given even the fallen false bishops of the v2 anti-church the awesome gift of free will.

Bishop Fournier warns us that these false bishops are an obstacle:

“[T]he hearts of those men will be left insensitive, hardened and inflexible in their ideas.”

To what are these false bishops inflexible?

To Jesus Christ’s Infinite Love in sending out His Apostles to preach to the nations, and to convert all nations to the One, Holy, Catholic, and Apostolic Faith.

To the reality that eternal salvation can only be sought from Jesus Christ and the Church which He founded, the Roman Catholic Church; (please understand, I do not refer to the masonic anti-church that has been in power since October 26, 1958).

To the required effort, the fatherly love, that acts for the conversion of these foreign enemies.

Love is a decision, it is a commitment to action, regardless of the personal cost.

Come Holy Ghost, fill the hearts of Thy faithful and kindle in them the fire of Thy Love. Send forth Thy Spirit and they shall be created and Thou shall renew the face of the earth!