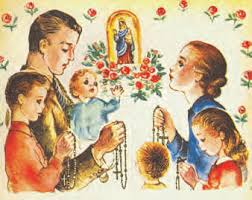 “Injustice is spreading around everywhere, my children; attacks are directed against Christian laws; they are violated, faith is exposed to such a terror that a miracle is needed to save it. My children, evil is going to increase, expand, move ahead like a river knowing no boundaries anymore…

“My children, today, on this Feast day of the Purification, I ask you never to trample the Cross underfoot, never to follow the example of an immense crowd [of persons] who are going to prefer apostasy and to surrender their souls to damnation for the sake of saving the body.

“I ask from all of you to recite, every single day, a prayer to hold back the inexorable Justice of my Son. This Justice is about to fall down upon the apostles of the Church, not upon all of them, but upon a large number. They call avenging down upon the earth by their immodesty, their profane words, by the calumny and contempt they pour out upon everything my Son accomplished for the sake of His people.

“My children, each time you can, recite on behalf of them, morning and evening, the entire MISERERE, or at least one Our Father and one Hail Mary, or an Act of Contrition at the foot of the Cross.

“Ah! Nevertheless, how many worthy and saintly priests there are upon earth comforting my Divine Son and giving Him some compensation! But, on the other hand, how many sorrows He suffers! The former will receive shelter under my mantle; and those who, apparently, are going to kill the Church and its glorious voice, will not come to attack those [who are] under the guard of a Mother.”

Reflection on the Prophecy:

How painful to note that already in 1881 “Injustice is spreading around everywhere,… attacks are directed against Christian laws.”

The 1880’s are already a time when the holy faith of the baptised is “exposed to such a terror that a miracle is needed to save it.”

And since then, evil has been increasing in its strength, in its audacity to openly attack Christ’s Church and push aside Christ’s own Vicar (the Papacy):

“evil is going to increase, expand, move ahead like a river knowing no boundaries anymore…”

Who is instigating this?

The freemasons, for they are the ones who step on the Crucifix as part of their rituals.

And masonry has been recruiting baptised persons. This is why the Blessed Virgin Mother says: “I ask you never to trample the Cross underfoot.”

The masons make life tough on Roman Catholics. They will only promote you at your job if you join them.

But we cannot, for then we will be damned for all eternity!

We must continue to suffer their injustices and trust our bodily needs to Jesus Christ.

We must never “surrender [our] souls to damnation for the sake of saving the body.”

And these masonic men and women are all around us! They are even among some of the anti-vaccine voices, so we must be very, very careful.

Like the masons who infiltrated the Church and took positions of power within the Hierarchy in order to destroy Her from within, we will continue to know masonic men and women around us “by their immodesty, their profane words, by the calumny and contempt they pour out upon” the Holy Roman Catholic Church and Her Laws.

They are, in essence, as lawless as the demons.

Please be on your guard. We are living through the worst damage done by the enemies of God, but the devil wants everyone.

And you know that his first battlefield is our minds.

If we do not give in intellectually, then he will attack us physically.

So pray to the Virgin Mother of God to also protect you under her mantle, just as she protected those few Priests who remained faithful to Christ’s Church at the height of the v2 persecutions.

Many of these suffering, martyred Priests are in Heaven now, still ready to help us always.

If you were blessed enough to know one, then ask him to help you with your struggles. Ask him for his blessing. If you need to confess sins, then do so and ask him for his priestly absolution.

You will find spiritual peace, and the strength to soldier on for Christ, His Church, and the Truth, which are all one.

May the Precious Blood of Our Lord Jesus Christ cleanse our souls and convert all sinners who ask for pardon.