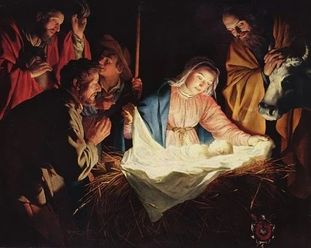 Going into this year and the next few years, we are facing persecutions, sufferings, and, if God graces us, martyrdoms. The prophecy below was first published on Christmas Day 2017.

May this year’s Christmas time give us the blessings that we need to fortify your souls. The devil wants to discourage us, any way he can, from praying our daily prayers, especially the Holy Rosary that gives so many graces. We need to make the time, set up the habit, and remember to pray for a long-awaited Papal restoration—may God give us this great grace soon.

Have a very Blessed Christmastide. Our Saviour is born! Alleluia!

“I will shorten the time of the chastisements because of My victims, because of My Sacred Heart, and finally to give sooner the chosen King, the elect of My Heart.

“I will stock the land of France with flowers, that is with pure hearts, filled with repentance, who will be loving Holy Church, the Holy Father and France:  a new generation. They will grow in My grace and live under the ruling of a very pious King, who, because of his virtues, will be the most shining ornament of France. I prefer you to forget about other revelations [rather] than about this present one.” (Diary, December 1st, 1876).

It is heartening that God “will shorten the time of the chastisements”.

It is humbling that He will do so “because of [His] victims”, that God sees how we suffer, and that it matters to Him because He loves us infinitely.

You see, we are these victims.

Some of us have lost our homes, and have had to find a cheaper, mortgage-free dwelling.

Some of us took early retirements, again to avoid the jab, but we wonder, amidst the rumours of banks closing bank accounts and confiscating our money (and governments have done this, such as Argentina), how long our reduced pensions will continue to provide an income.

Some of us anticipate not being allowed to gain access to our money if we do not have the passport. This worldwide creation of the have’s and the have not’s seems very likely as no one seems to care that services are already being denied to many: participation in sports (for children, for instance), eating at restaurants, flying on planes, etc.

Some of us realize that either we are too old or it is too late to move away from cold winter climates.

Some of us see that the threatened camps are indeed the path that lies ahead for us.

In this prophecy, Christ tells Marie-Julie:

“I will shorten the time of the chastisements…” This grace will make the events more survivable for many of us, especially for those who have a backup plan: fur clothing and extra blankets for the cold areas, extra food and water.

“I will stock the land of France…” God promises that men, women, and children of Faith will live on, outliving the current one-world government’s diabolical mandates. If this jab causes infertility, then it is those who have refused the jab who will be the parents of tomorrow!

“…the ruling of a very pious King…” God has kept this future Roman Catholic king safe. He will fight against the Antichrist. He will give the world a true Pope again, and good laws, and stability.

Have a most blessed Christmas, everyone!