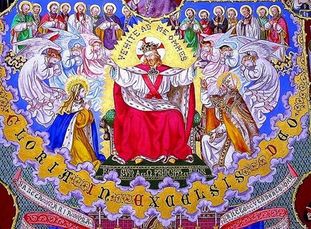 “Beloved faithful, have courage! A little more time still, and you shall see the whole of hell bear loose to overthrow everything. You shall see abominable things, frightening violations. Men’s malice is going to grow still more in its fury and wickedness. The first-born daughter of the Church shall be divided, portioned, dishonoured, stained with crimes… this is my last word…

And the vibrant voice of the ecstatic seizes upon all those attending:

“My beloved children, be comforted: at the hour of the terrible despair, under the blows of Justice, the elder daughter of the Church is going to see, rising on her behalf, those who have been her sincere friends. She is going to be saved and will sing the thanksgiving Te Deum.”

For those of you who have the English translation of this prophecy, there is a mistranslation of which to be aware: France, as the eldest daughter of the Church, takes the feminine pronoun “she” (not “it” like in the English mistranslation). This error, found in the second paragraph, has been corrected by checking with the French text found in Les Propheties de La Fraudais, p. 38, also published by Editions Resiac.

This week’s prophecy is a much-needed reminder to have courage, because we are in these times of chastisements at the hands of the evil ones.

It is frightening to read: “… you shall see the whole of hell bear loose to overthrow everything.”

Now that parents are being stripped of their God-given rights over their own children, we can see that even the family has been overthrown.

The latest crime against families:  students will be vaxxed in schools, against their parents’ wishes.

Parents really need to look at home schooling options. If you want to know more, please email the editor at: mjjprophecy@shaw.ca

Pensioners will be stripped of their pensions.

Hospitals will need to be avoided because of the likelihood of being jabbed:

And the prophesied hardening of hearts will even be witnessed among family and friends (Luke 12:53), so have courage, because there will be isolation: “Men’s malice is going to grow still more in its fury and wickedness.”

And it goes without saying for those of us who are loyal to the exiled Papacy, that the Church is left defenseless, with only one option:  isolation in the desert as the means to protect Herself.

How did this happen to Christ’s Church?

France, the greatest provider of protection under a Catholic monarchy, and therefore the eldest daughter of the Church, is invaded by non-French (read: freemasonry) and is despoiled, and unable to help even herself (let alone Holy Mother Church):

“The first-born daughter of the Church shall be divided, portioned, dishonoured, stained with crimes”.

And then it seems that the voice of Jesus Christ steps in to speak words of encouragement, words of hope:

“My beloved children, be comforted”

His message reveals the return of a Catholic France, which we know will be led by the French Monarch sent by God:

“[A]t the hour of the terrible despair, under the blows of Justice, the elder daughter of the Church is going to see, rising on her behalf, those who have been her sincere friends.”

“She is going to be saved and will sing the thanksgiving Te Deum.”

And we know from Don Bosco’s prophecy that it is the true Holy Father who will step into the ruined basilica of St. Peter to intone the Te Deum which the Angels will take up in chant.

Oh, to hear this prayer of heartfelt thanksgiving!!!

Dear Holy Mother, please obtain for us the grace to be there spiritually, if not corporally, so that we may know this joy!