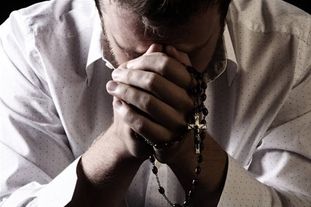 This is a continuation of the prophecy posted on October 16, 2021:

On three different occasions, within the time space of twelve to sixteen days, outside that immense city, next to a very narrow little hill, which fire from Heaven has shaken up several times, the shape of a small sun will appear, twice as big as the palm of the hand. That little sun will move around that little narrow mountain that is quite low.

Outside the city, at a rather long distance, there lies a hamlet, remote and low, very simple under the gaze of the passers-by. The little sun will pass over that roof, after it went three times around it, in a low weather, around ten minutes past four in the afternoon. It will leave behind the form of a very thin and very narrow jet of its flame. [This jet of fire] will pass on the roof; then that jet will disappear just as if it had never existed.

And the Flame says:

“Reclining in a cradle lies a child, twelve months old, of a beauty similar to that of an angel… In his innocent littleness, a grandiose and sublime action is reserved for him.

“Attracted by the shining of the little sun, the child will be carried, by his mother’s arm, to the appointed place. A man’s voice, even would it be the loudest, the most eloquent and the most learned on earth, would never be able to reach the striking development of that child’s voice.

“The resounding voice of that mortal angel will announce, with a power which will reach to a distance of several leagues, will announce, by Divine permission, the terrible misfortunes which are awaiting the homeland. He will make that announcement very shortly before all those projects are awakened.

“Just like many others in France, the clergy of that place will deny their belief in the commandments of Heaven. Authority will be punished: culprits will dip their hands into the blood of those men who will have refused to surrender to the voice from Heaven.”

The voice says that Amiens will be terribly punished: gatherings of bad Christians will realize great disorders through fire and deadly weapons.

“That child will be speaking for about twenty-seven minutes, with sobs in his voice, which will cause even the grass blades to be moved. That announcement, terrible for France, will be universal.”

The Flame goes on:

“The last minutes will be terrible for the earth and for the Eternal City. The scourge which will be discovered about the Russians, after only two days, will seem very close at hand, with terrible trials for that people.”

This week’s prophecy connects the weapons of war (fire falling from the sky upon the city of Amiens) with the miraculous denouncement of evil plottings of French Freemasons in Amiens by a twelve-month-old baby, and “the last minutes” before a Russian offensive.

The following fiery events seem to be caused by new weapons of war:

“On three different occasions, within the time space of twelve to sixteen days” small fire balls will move low over our homes, striking here and there.

When, in France, “the shape of a small sun will appear, twice as big as the palm of the hand” then a baby boy, only one year old, will speak.

Heaven will be using this infant to shed light onto the secret and evil workings of the freemasons in Amiens, France: “gatherings of bad Christians will realize great disorders through fire and deadly weapons.”

Of course, there will be retaliation for what is done to Russia, and so:

“The resounding voice of that mortal angel will announce, with a power which will reach to a distance of several leagues, will announce, by Divine permission, the terrible misfortunes which are awaiting the homeland.”

And, because God gives us the gift of free will, things will be revealed only after the men responsible make their deadly decisions.

This is why Saint Joseph was given the dream about Herod’s plan to kill all male babies up to two years old, because Herod had just given his command that very same night. The evil Herod was allowed his free will, as we all are.

And so, this baby that will speak with the loudness of an Angel “will make that announcement very shortly before all those projects are awakened.”

And, since today’s weapons are so very deadly to life, the effects will cause death and suffering worldwide: “[t]hat announcement, terrible for France, will be universal.”

God gives His warning from His Love and His desire that those with good will shall repent of their sins rather than dying obstinately in their sins!

Again, this prophecy seeks to make us understand that sudden, worldwide deaths will result from this ‘European’ war:

“The last minutes will be terrible for the earth and for the Eternal City.”

Now is the time to quit your masonic lodge and pray the Holy Rosary!

Please, everyone, make a sincere Act of Contrition part of your nightly routine!

Holy Mary, Mother of God, pray for us now and at the hour of our death. Amen. +