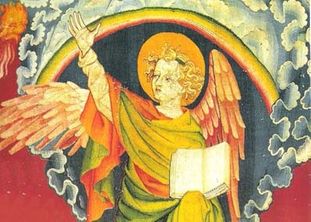 “Austria will be terribly threatened.

Two kings will confide to one another and will make ready to march with their armies, against the Eternal City. Spain will go through immense and lengthy tortures under the power of those two kings.

“After they will have realized a terrible damage everywhere, such as in France, they will fall back upon the other powers [governments]. There will come down upon Belgium an immense invasion.

In reading this week’s prophecy, it is prudent to recall that prophecies may be altered by prayers and fasting.

Thanks be to God that we are in the period of the Lenten fasting, so that we may offer up our daily fasts for Mercy from Christ Our Lord for what is unfolding before us!

By looking into this prophecy, we may understand specifics for which to pray.

For instance, if we had read this prophecy even two years ago, we could not have had the certainty that we have today that the two kings mentioned in this week’s prophecy are today’s heads of Russia (Putin) and China (Xi):

And then, there is the situation of Mr. Putin’s verbal threats, which are given as a dire warning, such as the threat of a nuclear strike against any NATO country who helps the Ukraine.

Well, Marie-Julie Jahenny’s prophecy does mentions a terrible threat made to an individual country:

“Austria will be terribly threatened.”

And then there is the mention of both armies marching “against the Eternal City.”

With the Vatican City surrounded by Rome, called the Eternal City, it is easy to also imagine the invasion of the Seat of the satanic Novus Ordo.

In an interview given in the early 1990’s, Archbishop Arrigo Pintonello, a friend of Pope Gregory XVII who referred to his old friend as “the best Pope”, reveals that the head of worldwide Freemasonry is inside the Vatican.

He tells that there is, in the Vatican City, a council of thirteen, headed by the anti-pope.

This aligns with what the Blessed Virgin Mary said in her apparition at LaSalette:

“Rome will lose the Faith and become the seat of the Antichrist.”

For any true Catholic who prays that the satanic anti-popes Bergoglio and Ratzinger and their fellow masonic spiritual assassins be stopped, there must be a sense of relief that the reign of the Church of Darkness will finally be ended…

Could this invasion be the prophesied time for the true Pope to be able to emerge from His Exile and sit upon the Chair of Saint Peter once again?

Let us pray for the Papal Restoration and for the French Monarch who will bring this about!

And yet, the dread of countless soldiers and civilians dying in their mortal sins without true Priests to absolve them and save them from eternal Hell, we must, out of Holy Charity, pray for the grace of final repentance for those who will die in this invasion of Rome and the Vatican City.

Putin and Xi’s invading armies will war against other countries as well:

“After they will have realized a terrible damage everywhere, such as in France, they will fall back upon the other powers [governments].”

These other powers must mean non-European governments, and so, yes, we must realize that these armies will come against the U. S. A., Canada, and other NATO partners.

But one question must be asked from this week’s prophecy:

Why will Belgium be especially attacked?

Belgium has the Beast system. It has the satanic CERN and the computerized control of the world’s financial systems.

Its role in the one-world government’s digital currency may be the reason why “[t]here will come down upon Belgium an immense invasion.”

The violence, the deaths, and destructions brought on by these two vast armies, and the retaliation by the NATO countries will be terrifying:

“My children, the whole earth is quaking.”

And so, this prophecy ends with the note of physical shaking from bombs, resulting volcanic eruptions, and the fear of civilians and soldiers alike.

Our daily Holy Rosary is our most powerful weapon. May God’s Holy Will be done!

May the Queen of Heaven, the Blessed Virgin Mary, send Saint Michael and his warrior Angels to chain all the demons and send them back to Hell --especially Quequet!

“Who is she that cometh forth as the morning rising, fair as the moon, bright as the sun, terrible as an army set in array?”(from the hour of Prime, in the Little Office of the Blessed Virgin Mary).

Mary, Mediatrix of All Graces, pray for us who have recourse to Thee!

Jesus, Mary, and Joseph, I love Thee! save souls, save many, many souls!

May God bless & further awaken the Christian zeal in Poland, Hungary, Croatia & neighbouring countries so that they may once be united with Pope Gregory XVIII and the coming French Monarch!