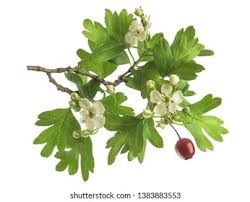 “My children, the only remedy which can save you, and give you back your health, is the following: “My children, do you know Hawthorn leaves which grow in most hedges and have long and sharp tops?”

“My children, the leaves of this thorny plant are the only means to stop this sickness from progressing. This is how you can use them. Gather the leaves and not the wood of the branches; even if the leaves are dry, the remedy will still be as efficacious. Put the leaves, my children, into a cup of boiling water. Leave them in this water for 14 minutes, covering the cup with something straight away, so that the steam will stay in the cup. My children, once the sickness manifests itself, you should take this cure three times a day.”

“My children, this disease will be widespread in Brittany, even if God’s Justice will strike less there than elsewhere. This disease will be serious, but unknown to you. Once you feel the pain, you will relieve it, as much as you can, as soon as you have acknowledged the symptoms. It will make you feel sick all the time, causing continual bouts of vomiting. If the cure is taken too late, all the infected parts of the body will become black, and on the black parts, pale yellow lines will show up.”    (5 August 1880)

“My children, this sickness will mark the beginning of the period where there will be a foul smell, emanating from all the crimes.

“Everything will suffer greatly. Christians and animals alike. After you have used the leaf for yourself, it could be applied to infected animals by putting it in whatever food they are eating or by boiling it in water.

“There will be a great loss of animals on account of the ‘black’ disease. The skin, around the outside of their eyes will blacken, the area affected will be as wide as a finger and a half. The animals will refuse all food; a lot of water will flow from their eyes. This leaf could also be used for this ailment. I feel compassion for everything. That is what I wanted to share with you, my children, with all the goodness and tenderness of my Heart.”   (16 August 188)

“My little lovely souls, the hawthorn can be used again as a remedy for this terrible disease – cholera.”   (21 June 1923)

[Source: pp. 19-20, Means of Protection during the Period of Chastisement, compiled by Isabelle Szczebura, the granddaughter of Andre, Marquis de La Franquerie].

A Disease with a Blazing Fire

“Grave diseases will arrive, which human craftsmanship will be unable to relieve. Which disease will attack first the heart, then the mind, and at the same time the tongue. That will turn out horrible. The heat accompanying the disease will be a devouring fire, intolerable and so violent that the parts of the body touched with it will be red from an intolerable redness. At the end of seven days, that disease, scattered around like seed in a field, will rapidly grow on every side, realizing immense progressions.

“My children, here is the only remedy with the power of saving you. You know the leaves of the thorns which are growing in almost all the hedges. The leaves of those thorns may arrest the progression of that disease.

“You will pick up the leaves, not the branch. Even dried up, they will retain their efficacy. You place them in boiling water, leaving them for fourteen minutes, keeping the container covered, so that the steam remain inside. From the very start of the attack by the disease, that remedy will have to be used three times a day.

“On the Monday after my Assumption, you will offer those leaves of the thorn-bush to me, and you will pay attentive heed to my words.

“My children, that disease will be strong in Brittany. The thought of God will be much lesser around there . . . the disease will produce a continuous sickness on the stomach, vomiting. If the remedy is taken in too late, the touched parts of the body will turn out black, and through the black part there will be traces turning to pale yellow. (August 5, 1880).”

Reflection on these important prophecies:

Hawthorn:  Even when the leaves are dried out, they still make an effective yet mild-tasting tea against Cholera and even congestion.

Steep the leaves of the Hawthorn bush for 14 minutes,with a lid so as to keep in the steam.  Drink three times a day.  This is a mild-tasting tea which also removes sinus congestion and lessens coughing.

During the MORTAL PLAGUE:

There will only be one remedy for protection.  It will be to swallow, written on very thin paper:  "O JESUS, CONQUEROR OF DEATH, SAVE US. O Crux ave."

Also, we need to offer the hawthorn leaves to the Blessed Virgin Mary on the first Monday after her feast day of the Assumption (August 15).

In this year 2022, the day to make this offering of thanksgiving is on Monday, August 22. This is also the feast day of the Immaculate Heart of Mary.

The first link below contains several informational videos to help you with identifying, drying, and steeping the hawthorn leaves.

Holy Virgin Mother of God, pray for us now and at the hour of our death. Amen.