The French Monarchy Will Resume 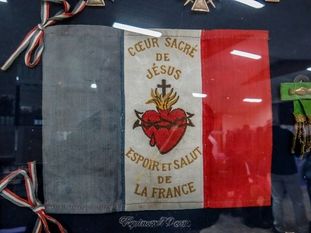 “God’s punishment is above you. He cast you headlong into the abyss as a punishment to your pride. You have been locked in Hell to cause suffering on damned souls. Be gone, cursed one.”

The monster took to flight together with his own. On taking his flight, he drags away close to half the crowd assembled in front of the throne. But a large number of those unfortunate cry out:

“Why are you driving us away?  We are not wholly yours.   We offended God,  that’s true,    but we are not lost forever.”

“There will be,” he says, “the moment when peace is going to blossom again. But previously, a great penance has to appease Divine Wrath. The Lord is the One who is to exert His Justice by Himself. He is the only one to whom it befalls to chastise; but, by so doing, He will purify the earth and its people.

“He will spare nothing. He will destroy the earth, to sow a new seed on it. You are the one, dear France, France so dear to Jesus and to His Immaculate Mother, you are the one who is to pick up arms in order to defend yourself against wickedness and against Hell. You are the one whom the Sacred Heart is calling… do not hesitate to give yourself to God.”

This week’s prophecy gives us great hope: we can still act to appease the Divine Wrath, while the devil cannot because he has already been damned to Hell.

It is up to each one of us to do our part, to take the necessary actions to defend the Truth, and the right of true leadership under God in each of our countries.

As this prophecy shows, “peace is going to blossom again” but first we must conquer our sins of apathy and silence.

Our apathy and silence have allowed evil to rise to places of power in business and government.

And the evil ones have been murdering babies in the womb, and trafficking babies, children, and youth for satanic rituals and to satisfy their hell-bent lusts.

These great evils against these holy innocents are why we must realize that God will send us worldwide suffering, because “a great penance has to appease Divine Wrath.”

All thanks be to God that He will allow Himself to be appeased for such great evils, otherwise which of us could be saved?

But we must wear the spiritual belt of truth (which is afforded to us by the Cord of Saint Joseph), so that we do not complain about the great destructions which have already begun and which will grow in scope and intensity:

And just as a farmer burns his fields to prepare them for next year’s planting, God wills earthly destructions:

“He will destroy the earth, to sow a new seed on it.”

[Please note: the French version of this prophecy must be consulted, as the English mistranslates the above quote with “I” rather than “He”] .

And who has God chosen on His behalf to defend all that is good and holy? The French Monarch:

“You are the one, dear France, France so dear to Jesus and to His Immaculate Mother, you are the one who is to pick up arms in order to defend yourself against wickedness and against Hell.”

Recall the formal custom of referring to a monarch by his country’s name. Their total service to their country is mandated by God. They do not use their surnames, and they are to serve under God, and in doing so, they are to use the royal “We”.

So it is the true French Monarch that is “so dear to Jesus and to His Immaculate Mother”, and not the masonic country since the French Revolution!

But the French Monarch is God’s solely chosen one:

“You are the one whom the Sacred Heart is calling… do not hesitate to give yourself to God.”

This exiled one is to be the Great Monarch of all time.

In this prophecy, God is telling him to put aside all doubts and human fears and first consecrate himself to God before he “pick[s] up arms in order to defend [himself] against wickedness and against Hell.”

By first consecrating himself to God, he will conquer.

Yesterday, June 24, 2022, the Sacred Heart gave the first victory to the holy innocents by the overturning of federally guaranteed abortions in the U.S.A.

It is a great start in saving lives, and yes, of the parents also.

May the Sacred Heart’s next victory be the overturning of masonic/satanic governments with the crowning of the French Monarch.

There will be many battles, big and small, for each of us, in reclaiming the sacredness of life and the right to be ruled under Christ the King, Our Redeemer.