FROM BRITTANY TO THE KING’S ENCOUNTER, PART 1 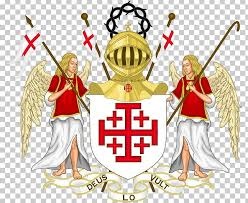 On entering into the vision, I find myself carried away upon a summit, whence I contemplate a shining star which sets to guide my soul. I follow after it, and I see it is leading me towards a kind of temple radiating with heavenly beauty.

I walk into that vast dwelling place the splendor of which is sublime; I see the Blessed Virgin kneeling amidst a resplendent light.

“This is the place where, in the purity of my soul and body, I was presented to the Lord, on this day, the day of the Presentation.”

“Father Infinitely Holy, I beseech Thee with my heart of a spouse and of a mother, to be so kind as to put an end, on earth, to the trials of just and faithful Christians who keep their faith in Thy Divine Son’s promises, who is also my own Son.

“Most worthy Mother of My Divine Son,” replies the Eternal Father, “the One I sent to save the world has finally entered the great decision for the fulfillment of the promises He had revealed to the Saints, men and women, whose glory the Church is or will be singing about…

“Most Holy Mother of Jesus, forewarn your people that the Lord’s approach is not far off. But, first of all, He is going to rapidly take hold of the re-establishment of His glorious works. I assure, and assert, to My people on earth, that My Son has already started… on the manifestation of the conquest of the guilty ones.”

--“Yes, Divine Father, saintly men, servants chosen by Thy Eternal Son for the realisation of the Church’s triumph, have already seen, with their own eyes, the well-announced reign of the wicked and of the culprits, in that struggle where blood will be shed in a double proportion.”

“My children, here is the sign which will point out the battle to be nearing for the salvation of the Church and of its elder daughter. First of all, the wicked will be ruling victoriously.  Their will shall not be overturned before the epochs indicated in past ecstasies, before all these men…”

--Not too hard, kind Mother, I suffer atrocious pains within my heart, which is already enduring the forecasted pain. Please, kind Mother, not hard.

“No, my children, but I must give you the momentous warning that evil will grow worse, and those evil doers will report triumph as it has been announced.

“After their dominion of a short victory over the whites [the army of the just] – and those who are not – all of my people will have to suffer more or less; after the victory of the ungodly will have covered almost the whole of France with blood and dead bodies, the white army of victory will cleave through thousands and thousands of guilty triumphers who will receive their punishment. My children, it will pierce through the redness of their souls. But they will change neither their way of thinking nor their opinion. That will be visible even to the eyes of the mortal Saviour [the French Monarch] and of his “royal” soldiers. Chastisement will have reached them [the evildoers] but they will not be changed.”

This week we begin Part One of a three-part prophecy.

This prophecy contains an important announcement for all of us today.

Marie-Julie is “carried away” in her soul “upon a summit” where she contemplates “a shining star”.

In following the “shining star”, she is led to “a kind of temple radiating with heavenly beauty”, the holy place of the Presentation of the Blessed Virgin Mary.

It is within these holy walls that the Holy Virgin Mother of God reveals that:

“[T]he sign which will point out the battle to be nearing for the salvation of the Church and of its elder daughter … [is that] the wicked will be ruling victoriously.”

“[E]vil will grow worse, and those evil doers will report triumph”.

Yes, for the first time in history we can agree that the wicked are in control of most countries in the world.

“[T]he victory of the ungodly will have covered almost the whole of France with blood and dead bodies”.

This prophecy separates the words “blood” and “dead bodies” as if to indicate war (blood is red, which symbolizes war), and a plague (i.e., the Bubonic plague was called the Black Death).

This can happen, and not just in France, but in the NATO and BRIC countries.

Surely this must be why Jesus Christ said that if time were not shortened, no flesh would survive! (Matt 24:22)

“[T]he Lord’s approach is not far off. But, first of all, He is going to rapidly take hold of the re-establishment of His glorious works.”

Christ will re-establish France as a Catholic monarchy, and the Church shall have a true and holy Pope sitting on the Chair of Saint Peter once again.

France will protect the Pope as He ordains and consecrates true and holy Priests and Bishops.

There will once again be sanctifying graces from the reception of the Holy Sacraments.

Hearts will be converted, and people will live holy lives.

And what of the evildoers (yes, even among our own families)?

Lies and evil actions will be revealed by God’s holy men: “[T]he white army of victory will cleave through thousands and thousands of guilty triumphers”.

But the evildoers love their sins, their perverted rebellions, more than they love the truth, so they “will change neither their way of thinking nor their opinion… they will not be changed.”

The reason why sinners will not be converted during our time is best explained by the Patriarch Elias, the validly consecrated bishop and leader of the Byzantine Catholic Church who wrote on June 9, 2022 to the bishops and priests around the world and made this inspired observation about the justification of sins by sinners:

“By legalizing sodomy, the Bergoglian Church has diametrically changed its mission and ceased to be the Church. It tells the sodomites that their perversion is willed by God. That is why they no longer have to, and even cannot, repent. All that remains is to accompany the sodomites on their way to hell. By analogy, Bergoglio applies this principle of the denial of sin and repentance to all sins. He thus denies the need for a Saviour! No one in Bergoglio’s sect therefore has a chance to save their immortal soul!”

For the full letter, click on the link below called CATACOMBS.

Let us pray for the triumph of the French Monarch, the army of the Cross (the holy men) and for the Papal Restoration!