FROM BRITTANY TO THE KING’S ENCOUNTER, PART 3 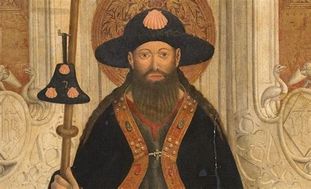 After those words the Blessed Virgin falls to her knees at the feet of the Eternal Father, and here are the Heavenly Father’s words:

“Most worthy Mother of God, My Eternal Son wants to manifest the sign of the mortal Saviour and turn His power against the foreigner’s side. In France, every eye will be in a position to contemplate such a favour in his behalf.

“He will be, the Blessed Virgin goes on, as an ornament in the sky, with the shape of a square star, bearing at its centre a sceptre and a crown which every eye of the nations on earth will be able to distinguish.

And she goes on saying:

“Since my Divine Son does not succeed in convincing his own people about that fortunate day which will take them by surprise in the midst of their evil and guilty thoughts, He will start by placing under the sky the announcement of the predictions given through past centuries and during this present one.

“I quote, she says, my Son’s spouse, that Sister of Saint Vincent de Paul, who, amidst that poor Nineveh, was favoured with my glorious apparitions (Catherine Labouré).

“I quote that saintly spouse who lived in Pau, a few years ago, and who went to the Holy Land, in order to lay the foundations of a monastery of faith and virtue.”

“Yes, replies Marie-Julie, I was acquainted with her… Brother, she was my Sister of Pau, whom I saw in a vision, wearing the Saviour’s stigmata. That will be five years ago on the tenth of next month. I saw Him in that vision, piercing her heart with a lance, sinking the nails which crucified her and moreover the sponge and reed. The Lord had told me to hold, for five years, onto a few momentous words of that vision. I obeyed. He told me: Some day you will deliver My three secrets.”

“Little time is left before the end.”

“I quote, furthermore, continues the Blessed Virgin, that saintly and beautiful soul, the Sister of the Holy Face, Sister Saint Peter, who had begged to be left unknown until the eve of the afflictions about which the Lord had made her see the strange deadly struggle. Within a short time, my children, Touraine will blossom again by bringing out into the daylight what will be the parting point for the glory which is awaiting it.

“I will quote that other maid-servant who prayed and suffered with such nobility, Marie Estelle, whom the Christians have left in oblivion, together with the holy secrets Heaven had deposited in her soul.

This week, we complete the longer text of this ecstasy about the French Monarch.

God the Father says: “My Eternal Son wants to manifest the sign of the mortal Saviour and turn His power against the foreigner’s side.”

Since the Catholic Church has been universally established among every race of people, the only “foreigner” must be Her enemies: zionists and freemasons.

This prophecy asserts that Jesus Christ will use the French Monarch as His instrument in putting a stop to the power of these enemies!

The “mortal Saviour” is described as “an ornament in the sky, with the shape of a square star, bearing at its centre a sceptre and a crown which every eye of the nations on earth will be able to distinguish.”

As a “square star” does not appear in nature, it must have a symbolical meaning.

The quality of squareness means to have conformity to good principles. [Source: Oxford English Dictionary]

In the spiritual sense, this means that this mortal Saviour will hold onto the principles and holy dogmas of the Catholic Church, from the time of the Council of Trent in the 15th century.

But how will we know him?

In our time of general apostasy, his conformity to good principles means that he will be noticed, he will stand apart by what he says.

In fact, his description as a “square star” is a vital clue as to his identity:

Father Kramer’s Book of Destiny, an analysis of the symbolism of Saint John’s Apocalypse using the Church-defined symbols of the Old Testament, identifies a star as being a prominent cleric, such as a bishop or priest.

To support this, we also find that a square has to do with heraldry; that is, the division of a shield (or crest) into four parts. [Source: Oxford English Dictionary]

Bishops and noblemen have such shields or crests.

The mortal Saviour’s crest will have “bearing at its centre a sceptre and a crown which every eye of the nations on earth will be able to distinguish.”

And, in connecting this prophecy to the two earlier parts, we can affirm that the “mortal Saviour” and the French Monarch are one man!

Christ will continue to bring this understanding through the publication of the writings of his privileged souls:

“He will start by placing under the sky the announcement of the predictions given through past centuries and during this present one.”

Three such souls are mentioned here: Sister Catherine Labouré, the Sister of Pau, Sister Saint Peter of the Holy Face, and Marie Estelle.