THE LAST TEARS OF THE LIVING CHURCH 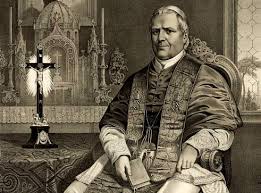 “My children, says the Blessed Virgin, on February 22nd I will leave to weep over the Eternal City, to cry over the chains of the saintly Pontiff, which are going to grow heavier; to shed tears together with him, my children, the last tears of the living Church, because sorrow is going to put it out for a while. That period is written down in Heaven; but men seem, within a short time, to be able to write it down upon earth.

“My children, I will remain for five days weeping over that place. I will come back. Within a few days it will be given for me to reveal everything, without anything left out or secret any more.”    (February 27, 1882)

In this prophecy we contemplate the Church besieged, as Pope Pius IX is unable to leave the confines of Vatican City.

This saintly Pontiff was unable to act; Freemasonry had taken over Italy, the Papal States, and France, like a wildfire.

There were no French troops to come fight for the Catholic Church since the elites had used the French Revolution to murder the Catholic monarchy of France.

(The king and his family were held prisoners in the jail cells of the Jewish temple in Paris before they were falsely tried and murdered – yes, even the royal children! This was the heinous and guilty foundation of France’s “liberty, equality and brotherhood”!)

The Blessed Virgin tells us “I will leave to weep over the Eternal City, to cry over the chains of the saintly Pontiff, which are going to grow heavier.”

What did the Mother of God know was going to happen?

She knew that the real target of freemasonry was the Papacy; if they could get that, then they could destroy the Roman Catholic Church from within.

Using the imagery of a blown-out candle, the Virgin Mary says that the Church will undergo a “sorrow [that] is going to put it out for a while.”

“In the Holy Place itself, where has been set up the See of the most holy Peter and the Chair of Truth for the light of the world, they have raised the throne of their abominable impiety, with the iniquitous design that when the Pastor has been struck the sheep may be scattered.”  (See link below for full prayer).

This was accomplished with the conclave of 1958 -- the pushing aside of Pope Gregory XVII -- and with three following conclaves until His Holiness’ death on May 2, 1989 (the feast day of Saint Athanasius).

So there will be no light of Faith or reason coming from the unoccupied Chair of Saint Peter.

We continue to hear only errors, heresies, and blasphemies coming from the masonic impostors (anti-popes) whose “modus operandi” is to inject sin upon sin so as to destroy people’s faith little by little.

“[T]he last tears of the living Church” continue to be bitterly shed as we contemplate the empty chair of Saint Peter and the unhindered growth of satanic deception which seeks to make sins appear to be virtuous.

However, an end is in sight: the Virgin Mary says that this situation is only “for a while.”

The Warning will come, and the Three Days of Darkness. The French Monarch will place the true Holy Father on the Chair of Saint Peter, to be a light to the world once again.

The satanic deception will end.