THE GREAT BLOW FROM GOD'S HAND 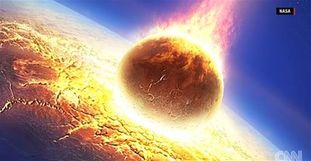 “The Great Blow from God’s hand will not be long lasting; but it will prove so terrible that a large number are going to die from being frightened. It is after this Great Blow that the triumph of the Church and of France will take place.

“First to appear is the one whom France will deem to be its saviour; but he is not going to be the true Saviour, the one who has been chosen and sent by God, and who will be from the lilies.”

This week’s prophecy gives us a sequence of two events still to come:

First, the “Great Blow”, the Chastisement, from which “a large number are going to die from being frightened.”

And then: “It is after this Great Blow that the triumph of the Church and of France will take place.”

Time and again we have read prophecies that speak of two events:

The first event is a comet that will crash into the earth and cause much devastation by means of earthquakes, resulting volcanic eruptions, and great tidal waves and flooding.

The second event is a resulting 3 Days of Darkness. The prophecies given to Marie-Julie Jahenny confirm that the air will be poisonous and that to step outside is to die. (Recall that volcanoes can give off up to eleven poisonous gases).

Marie-Julie is also told that the shaking will be so violent that some people will be thrown a distance of 300 steps.

We are especially warned not to look at God’s Chastisement, because to do so is a profanation of a Holy cleansing of this earth by God.

God tells Marie-Julie that those who look from curiosity will die.

This is what happened to Lot’s wife. So, we must get inside, lock doors, close off all windows, use cloths to stuff up our vents, toilets, faucets and open pipes. Then we must light a blessed candle and start praying before a Crucifix and an image of the Immaculate Heart of Mary.

We are not to look out again until the sun comes out on the third day.

We will know that this Chastisement is Divine because only blessed candles will be able to give us light during those 3 Days of Darkness.

If you do not have an image of the Immaculate Heart of Mary, there are many to be found on Google Images. Look at Youtube videos to see how to copy, paste, and print images from the internet.

After this Divine Chastisement, people will have to work hard, in charity, to survive together. Societies will look to their governance to re-establish infrastructures.

The Church will not come out of Her Exile until the French Monarch rules over France.

Sadly, he will not be the first leader chosen by the French people.

It is thanks to him that the Papacy is re-established, with a holy Pope who is truly Catholic, and of the true Papal lineage coming after Popes Gregory XVII and Gregory XVIII.

This will be a time of great rejoicing for all of us, all over the world, when this long-awaited news reaches us!

There will be many holy vocations to the true Priesthood of Christ and the truly Catholic religious life.

What joy to welcome these precious missionary souls into our countries, our communities, and our hearts!

People will be catechized and converted, and there will be Holy Sacraments to give us sanctifying grace from God once again.

To the French Monarch and His Holiness in Exile we say:

We thank God, in His Mercy and Justice, for you. Stay strong! Know that many, many souls pray for you daily. We await your coming with great longing and joy! Amen. Alleluia!