LA SALETTE PROMISES ARE BEING FULFILLED 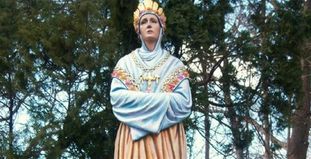 “I still have in my eyes, says the Blessed Virgin, the remains of the tears I shed on a similar day, while wishing to bring the good news to my children, if they would be converted, but the sad news if they were to persevere in their wickedness. Little attention has been paid to what I revealed…

“My children, when I recall, from the day when, on the holy mountain, I presented the threatened earth with my warnings… when I recall the harshness with which my words were received… not on the part of all, but of a large number. And those who should have passed it along into the heart of my children with an immeasurable confidence and deep penetration, did not even think much of it. They despised my words and for the most part, denied their confidence.

“… Well then! I assure you that all those promises, my intimate secrets, are to be fulfilled. They must take place in a visible way… When I am seeing what is awaiting the earth, my tears run down again…

“When the earth will have been cleansed, through the chastisements, from all the crimes and all the vices with which it is clothed, fair days will return with the Saviour who has been chosen by us, who is still, up to now, unknown to our children.”

How did the Church come to such destruction?

What, in your view, happened?

These are good questions to bring to those who share the Holy Roman Catholic Faith.

I recently asked a few of my friends and received the following answers:

The freemasons, the freemasonic infiltration of seminaries and convents since the 1700’s.

– Yes, freemasonry deposed the Roman Catholic King Louis XVI of France through the French Revolution and they already had their men in positions of power to take over the ruling of that country even to 2022.

Their motto was, and continues to be, liberty, equality, and brotherhood. But there was no place for God.

The leaders of the French people, the bishops and priests and other religious in positions of power did not teach the truth of Jesus Christ. They taught a different theology, a liberation theology.

That is, a liberation that seeks to free itself from God and His Church.

The same happened in the Russian Revolution, correct?

And the Blessed Virgin Mary warned of the continuing spread of this freemasonic humanism, this rejection of Christ’s Church, and the tragedy of the resulting loss and damnation of countless souls, a vast ocean of souls.

This is why, in this week’s prophecy, the Virgin Mary tells Marie-Julie Jahenny that she brings “sad news if they [God’s children] were to persevere in their wickedness.”

She recalls that “on the holy mountain, I presented the threatened earth with my warnings.”

Her warnings at La Salette focused on the unholy lives of the leaders in society, those men and women who were consecrated to God—the priests and religious.

Here are some excerpts of her warnings:

“The sins of those dedicated to God cry out towards Heaven and call for vengeance, and now vengeance is at their door, for there is no one left to beg mercy and forgiveness for the people.  There are no more generous souls, there is no one left worthy of offering a stainless sacrifice to the Eternal for the sake of the world.”

“God will strike in an unprecedented way.  Woe to the inhabitants of the earth!  God will exhaust His wrath upon them, and no one will be able to escape so many afflictions together.”

“The chiefs, the leaders of the people of God have neglected prayer and penance, and the devil has bedimmed their intelligence.  They have become wandering stars which the old devil will drag along with his tail to make them perish.”

“Physical and moral agonies will be suffered.  God will abandon mankind to itself and will send punishments which will follow one after the other for more than thirty-five years.”

“The Society of men is on the eve of the most terrible scourges and the gravest events.  Mankind must expect to be ruled with an iron rod and to drink from the chalice of the wrath of God.”

“May he [the pope] be on his guard against Napoleon:  he is two-faced, and when he wishes to make himself Pope as well as Emperor, God will soon draw back from him.”

“In the year 1864, Lucifer together with a large number of demons will be unloosed from hell; they will put an end to the faith little by little, even in those dedicated to God.  They will blind them in such a way, that, unless they are blessed with a special grace, these people will take on the spirit of these angels of hell; several religious institutions will lose all faith and will lose many souls.”

“Evil books will be abundant on earth and the spirits of darkness will spread everywhere a universal slackening in all that concerns the service of God.”

“… they will abolish civil rights as well as ecclesiastical, all order and all justice would be trampled underfoot, and only homicides, hate, jealousy, lies and dissension would be seen without love for country or family.”

“All the civil governments will have one and the same plan, which will be to abolish and do away with every religious principal [sic], to make way for materialism, atheism, spiritualism and vice of all kinds.”

“… the devil will resort to all his evil tricks to introduce sinners into religious orders, for disorder and the love of carnal pleasures will be spread all over the earth.”

Those consecrated to God had the responsibility to teach the faith from the pulpit, the confessional, in spiritual direction, in the classroom; in fact, in everyday conversations wherever they happened to be.

But the infection of freemasonry was already systemically infecting the Body of the Church, as Our Blessed Mother warns Marie-Julie Jahenny:

“And those who should have passed it along into the heart of my children with an immeasurable confidence and deep penetration, did not even think much of it. They despised my words and for the most part, denied their confidence.”

The denial of their confidence mean that these consecrated souls were of bad will; they did not hold the Catholic Faith in their hearts. The proof is that they had no closeness to the Mother of God.

Freemasonry did this by infiltrating to the top, to the position of the papacy.

As author Hutton Gibson once said, they used obedience against us.

When obedience goes against God it is a false obedience, but it is obedience nonetheless.

The teaching of catechetical half-truths and outright falsehoods has been so successful in dummying down the faithful, that today, the vast majority of people who call themselves Roman Catholics unknowingly embrace heretical beliefs and are in actuality outside the Church!

As another friend said, “We became weak in the Faith, the devil saw his chance, and he came in. We pursued pleasure, wealth, and luxury.”

The thinking of those misled has been so changed that they cannot even conceive of this possibility!

And, of course, these souls are at risk of eternal damnation because it is a dogma that there is no salvation outside the Church.

This is why, in this prophecy of 1901, the Virgin Mother of God says: “When I am seeing what is awaiting the earth, my tears run down again…”

But God does exist, and He is in charge. God made humanity, and Himself became man and died for humanity, to open the way to Heaven for us.

God’s chastisements, including His great Chastisement, the Three Days of Darkness, are acts of His Mercy because many people turn to God as a result of their sufferings.

But it is the great Chastisement, The Three Days of Darkness, which will put an end to the rampant ruling of freemasonry’s evil humanism.

The Three Days of Darkness is an act of God’s Justice because the demons and their diabolical dupes will be removed from this earth and cast into Hell.

The French Monarch, often referred as the “Saviour” in prophecies given to Marie-Julie, will be the ruler who will bring godly order to humanity and restore the true Papal lineage to the world.

There will be a time of universal peace as a result:

“When the earth will have been cleansed, through the chastisements, from all the crimes and all the vices with which it is clothed, fair days will return with the Saviour who has been chosen by us...”

Yes, that holy monarch has been chosen by God.

It is a truth that God loves each one of us and He takes care of us.

God has a personal love for each one of His children.

We need to see today’s punishments with His Eyes. If He punishes us, then it is the best thing for our souls.

We must do our part in returning His Love. We must look to do His Will in all things.

Holy Mother Mary, teach us to see God’s Holy Will in all things and to follow it always!