The History of Altar Linens 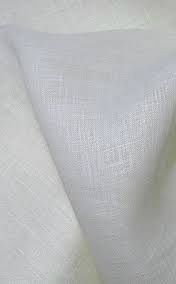 Why does Holy Mother Church use only 100% white linen for altar cloths, altar linens, and for some of the vestments of the Priest?

Linen was the cloth that was used for burials by the Jews. Christ's Body was wrapped with a linen shroud after He was laid in Joseph of Arimethea's tomb.

The Catholic altar is traditionally constructed to look like a stone tomb, from the practice of the Early Christians having Holy Mass in the catacombs, in the burial places of the martyred Saints.

From this tradition, there is an altar stone placed inside each altar top which contains the bones of three martyred Saints.

The Sacrifice of Christ Our Lord on the Cross has always been re-enacted by the Catholic Priests and Prelates upon these altars.

For these reasons, the top of Catholic altar is also covered with linen cloths.

Altar cloths in the Roman Rite are comprised of three cloths which are laid over top of each other, two (or all three) of which must touch the ground on either side of the altar.

In the Eastern Rite two altar cloths are used, both of which must touch the ground on either side of the altar.

The altar linens also refer to the linens used by the Priest or Prelate in the giving of the Church's Holy Sacraments.

For the Holy Sacrifice of the Mass, there are the Corporal, upon which the chalice and paten are placed; the Pall which is placed over the chalice to protect the consecrated wine (now the Blood of Christ) from getting dirt into it; the Lavabo, which the priest uses to dry his fingers after he has carefully washed his fingers after giving Holy Communion; and the Purificator, which is used to dry the Chalice after it has been rinsed with water after Holy Communion.

The making of altar linens is a holy endeavour and traditionally, one prays quietly for the priest who will use them as one sews them.

The embroidering of a small red cross onto certain altar cloths and vestments has both a functional and a sacred purpose.  Red sewing thread can be used, so that it does not bleed through during a washing.

Altar linens are stored in drawers in the Sacristy:

The Corporal is folded to look square (see the video below), the Lavabo is folded into a large rectangle, and the Purificator is folded accordion-style into a narrower rectangle.

The first of the linen vestments is the Amice, which is worn over the shoulders and tied about the waist.  The Amice is also stored in the Sacristy drawers:

The Alb, the second of the Priest's linen vestments, is hung from a hanger so as to minimalise wrinkling and maximize airing after each use:

How to Sew and Iron a Corporal Altar Linen

For altar linens we must use 100% linen of a white color. Stores usually sell three weights of linen cloth. The heaviest is pefect for altar cloths, and the medium weight is what you want for altar linens. The light weight is usually too skimpy to hold up to continuous use on the altar. Altar linens are usually changed weekly, and a video will follow about how to launder altar linens, and Corporals specifically. JMJ