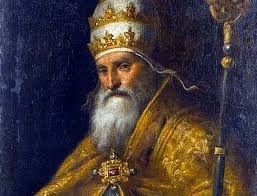 Pope Saint Pius V belonged to the Dominican Order, an Order of preachers and teachers.

The key paragraph (last paragraph of this Decree):

“No one is allowed to go contrary to this letter which expresses Our permission, statute, regulation, mandate, precept, grant, indult, declaration, or will and Our decree and prohibition; no one is allowed to act against it with rashness or temerity. But if anyone would presume to attempt this let him know that he will incur the wrath of Almighty God and of Saints Peter and Paul, His Apostles.”

At the very beginning, when We had been raised to the summit of the Apostolate, We earnestly bent Our attention and Our energies, and directed Our thoughts to those matters that pertained to the maintenance of the purity of the Church’s worship and to provide these, and with God’s help, We have striven with all possible diligence to produce them.

And since among other decrees of the Sacred Council of Trent decisive measures were to be taken by Us for the publishing and improving the sacred books, the Catechism, the Missal and the Breviary; now that the Catechism has already been edited with God’s help, for the instruction of the people, and since the Breviary has been amended for pure praise to God, it is by all means right and proper that the Missal correspond to the Breviary, since it is most fitting that in the Church there be unity in the manner of singing (the praises) of God and the ritual for the celebration of Mass, it naturally seemed necessary to Us that in regard to that which still remained of this project that We direct Our thoughts as soon as possible to produce and publish the very Missal itself.

Therefore We deemed that this laborious task was to be entrusted to select men of erudition; these men did indeed diligently compare everything with the ancient (documents) of our Vatican library and with other codices that had been amended and were incorrupt and that they had sought out on all sides; moreover, after they had consulted the writings of the ancients and of approved authors who have handed down to us memorials of the sacred instruction and of the rites that they used, they restored the Missal itself and the ritual to the pristine (original) form of the Holy Fathers.

We examined this critically and amended it. Then after mature deliberation in order that from this project, after the task had been started, all may derive benefit, We have ordered that it be printed in Rome as soon as possible, and after it is printed that it be issued. This has been done so that the priests may understand, know what prayers to use, what ritual, what ceremonies they are to retain in the celebration of Mass in the future.

But in order that what has been handed down by the most holy Roman Church, the Mother and Teacher of the rest of the churches may be accepted and observed by all everywhere, We  forbid that henceforth for all future times in all the patriarchal churches of the provinces of the entire Christian world, in all Cathedrals, in all secular collegiate and parish churches, and in the churches of any orders, in the churches of monasteries of both men and women, and also regulars of military orders, and both chapels and churches without any care of souls, in which the conventual Mass is sung aloud with the choir or is said silently and is said regularly or is required to be said according to the rite of the Roman Church, We forbid that Mass be sung or recited in any other way than according to the formula of the Missal issued by Us; this prohibition holds even though these churches are exempt in any way whatever, whether by an apostolic indult, by custom, by privilege, also (if  exempt) by oath, by apostolic confirmation or if they are protected by other faculties of any kind whatsoever; unless this faculty or exemption was approved by the Apostolic See from the very beginning of the institution, either by custom, or which very institution of celebrating Mass has been faithfully observed in the same churches for more than two hundred years; from these We in no way, by no means take away the constitution or custom of celebrating as in the above mentioned constitution. We make this provision so that if this Missal which We have issued should please these more, they could with the consent of the Bishop, or of their Prelate, or of a General Chapter, all things to the contrary notwithstanding, celebrate Mass according to this Missal; this We permit. But from all other churches above mentioned We remove (condemn) the use of their Missals, and wholly and entirely reject them, and We decree under penalty of Our indignation that never at any time is anything to be added, subtracted, or changed; this We determine and ordain to hold in perpetuity by virtue of this constitution. We strictly command, and We issue this command by virtue of holy obedience, that they set aside wholly and entirely in the future all other observances and rites and Missals, no matter how ancient they may be that they have been accustomed to use, that they reject  them entirely, and that they sing and read Mass according to the rite, the mode and the norm of this Missal which is now being issued by Us; and let them not presume to add or recite other ceremonies and prayers in the celebration of Mass than those that are contained in this Missal.

And in perpetuity We grant and permit that they may by all means use this Missal in singing or reciting Mass in any church whatsoever without any scruple of conscience, without incurring any penalties, sentences, or censures; in order that they may be able to do this and be able to use this Missal freely and lawfully, We by virtue of Our Apostolic Office, and by virtue of the present document, We grant and permit this forever.

No one may be required to offer Holy Mass in another way than has been determined by Us; no one, neither Pastors, Administrators, Canons, Chaplains, and other secular priests of whatever Order; and We likewise determine and declare that no one be compelled or pressured by anyone to change this Missal, or that this letter should ever be recalled or its effectiveness be restrained but that it may always stand firm and strong in all its vigor.

Now We will and decree by virtue of the same authority that after the issue of this constitution and Missal that the priests who are present in the Roman Curia be bound to sing and say Mass according to it after a month; those on this side of the mountain will be bound after three months; those beyond the mountains will be bound after six months.

In order that this may remain unchanged and free from corrections and errors We forbid under pain of penalties that a Missal be printed and issued without Our permission or the special permission of the commission to be set up for this (issuance of the Missal) in those places by Us (where Missals are to be issued); by the same commission the exemplar (copy) of the Missal is to be given to the printer and this exemplar the printer is to use as a guide for other printings; this Missal is to be compared with and made to conform with the Missal printed in Rome, according to its grant printing; it must be ascertained first that it in no way disagrees with this (Roman exemplar). By virtue of Our Apostolic Authority and by virtue of the present letter We forbid that anyone dare or presume to print, offer to others or receive a Missal (when these prescriptions have been violated). Penalties for those mediately or immediately under the dominion of the S. R. M. Holy Roman Church are confiscation of the books and 200 gold ducats to be paid to the Apostolic treasury, by the very fact (of violating this requirement); the penalty for others living in other parts of the world is excommunication (Latae sententiae; for example, the sentence has already passed) the other penalties according to Our discretion. The purpose of this is that no Missal be printed and issued without Our permission or that of the Commission to be set up in various parts of the world.

Here a few measures are stated to be taken for the communication of this decree. Wherever this letter is published it must be signed and sealed by the due authority so that it carries with it the same weight of authority as this letter in Rome.

No one is allowed to go contrary to this letter which expresses Our permission, statute, regulation, mandate, precept, grant, indult, declaration, or will and Our decree and prohibition; no one is allowed to act against it with rashness or temerity. But if anyone would presume to attempt this let him know that he will incur the wrath of Almighty God and of Saints Peter and Paul, His Apostles.