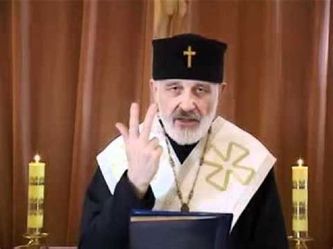 Pseudo Pope Bergoglio said he would not leave until he made irreversible changes.

The essential question is: Is Bergoglio a proper Pope whom Catholics are bound by conscience to obey? He is not! The fact is that he is a heretic who destroys the foundations of the faith, and therefore no Catholic can obey him! If anyone obeys him, he betrays Christ and His teachings!

Every Catholic must know that according to Gal 1:8-9, Bergoglio is under multiple God’s anathema – curse – for preaching a false gospel and is ipso facto expelled from the Catholic Church. The fact that he continues to occupy the highest office is because bishops and priests are unable to call the truth the truth, or a heresy a heresy, and to draw an adequate conclusion from it. They are thus involved in his crime. They even express their unity with this heretic aloud in the Mass every day and are unable to make even such a small change as to pray silently after the Consecration, as was the practice in the Latin Mass. By doing so, they would avoid proclaiming unity with the invalid Pope.

What do Bergoglio’s irreversible changes mean?

Bergoglio abolishes the first and greatest commandment of the Decalogue. Tens of thousands of martyrs preferred to suffer the cruellest torture and death rather than drop a single grain of incense before idols and betray Christ. Bergoglio, by contrast, publicly enthrones the Pachamama demon, thereby legalizing pagan idolatry and satanism or, in other words, the worship of demons, as a new teaching of the Church. We ask: Is it his private matter, or is it an ex cathedra act of faith and morals? Public idolatry is by no means a private affair of one who acts as Pope. By this deed, Bergoglio has proved to be a heretic, and therefore an invalid Pope. Therefore, all his actions are null and void. If any Catholic is so blind as to claim, contrary to the Scriptures and Church Tradition, that Bergoglio is a legitimate Pope, they negate the dogma of papal infallibility.

After Bergoglio abused papal authority and committed public idolatry, all Catholics who recognize him as Pope must regard his public apostasy as a teaching of the Church. This means that they must no longer repent of sins against the First Commandment, but must take the path of anti-repentance, that is, approve of idolatry. This elimination of repentance makes Bergoglio’s changes irreversible.

Whoever repents of the sins of idolatry or sodomy is in open rebellion against the current so-called Pope. Such a one will surely be punished by the Bergoglian sect for that. Such priests or bishops will even be removed from office. That’s nonsense! This is proof that the Bergoglian sect occupying the highest offices in the Church is not the Church of Christ, but the Antichrist’s pseudo-church – the synagogue of Satan (Rev 3). The mission of Christ’s Church is to proclaim repentance. Jesus said: “Repentance for the forgiveness of sins should be preached...” (cf. Lk 24:47).

Today, the entire Vatican is ruled by the spirit of the Antichrist, along with the Masons. This spirit no longer works secretly but openly. Bergoglio has meetings with Masons within the Vatican itself. They consider him their spiritual leader. He has fully adopted their agenda and actively implements it. Under threat of sanctions, he pushes for dangerous mRNA vaccination, enforces Agenda 2030, promotional transhumanist conferences at the Vatican, climate forums and so on... Bergoglio’s promotion of homosexuality, and even the legalization of the marriages of these deviants, shocks even people outside the Church! We ask every Catholic bishop, every priest, and every believer: Is sodomy a very serious sin, or is it in harmony with Scripture and Church Tradition? The answer is clear: Sodomy is in stark contrast to Scripture and Tradition. Its approval by the Church is like mixing together a powerful poison and clear water, light and darkness, Christ and Belial. If this immorality is legalized, which God’s Word warns against speaking not only of temporal fire (2Pe 2:6) but also of eternal fire (Jude 1:7), all moral laws are annulled. Bishops and priests in Germany have already begun to bless sodomite marriages in churches. Bergoglio approves it with his deliberate silence. Similarly, the Second Vatican Council with John XXIII and Paul VI silently approved the long-condemned heresies of Modernism, later disguised as the so-called historical-critical method. As a result, all theological schools and the entire Church were infested immediately after the Council.

By legalizing sodomy, the Bergoglian Church has diametrically changed its mission and ceased to be the Church. It tells the sodomites that their perversion is willed by God. That is why they no longer have to, and even cannot, repent. All that remains is to accompany the sodomites on their way to hell. By analogy, Bergoglio applies this principle of the denial of sin and repentance to all sins. He thus denies the need for a Saviour! No one in Bergoglio’s sect therefore has a chance to save their immortal soul!

With his 1907 encyclical Pascendi Dominici Gregis, Saint Pius X categorically condemned Modernism within the Church. This led to a spiritual revival. It was associated with the Devotion to the Sacred Heart, the First Fridays, etc.

By contrast, the Modernist Angelo Roncalli, John XXIII, appointed liberal theologians as moderators of the Second Vatican Council. The heretical decrees of the Amazon Synod and the witchcraft act with Pachamama in the Vatican Gardens today are the continuation of the heretical documents and the false spirit of the Council. This demon, who used to be offered human sacrifices, has been enthroned in the Basilica of St Peter. If any of the bishops accept Bergoglio’s irreversible changes, they will end up like the Apostle Judas.

Bergoglio is making irreversible changes in all areas. He has changed dogmas and God’s commandments with a so-called dynamic approach. By legalizing sodomy, he has changed morals. He has made irreversible personnel changes by appointing bishops and cardinals who are homosexuals, heretics or idolaters. He has had the entire Vatican vaccinated with an experimental vaccine, so he has subjected it to satanic anti-baptism. This is also an irreversible change.

Nevertheless, some priests and bishops say: There have always been crises in history, but we need to remain faithful to the Holy Father, and you see, the Church is still here today.

We answer: The Church of Christ will always be here, albeit in the catacombs. Today, however, the church structure is occupied by the Antichrist’s sect under the heretic Bergoglio.

Has any Pope been a heretic in the past, like Bergoglio? Yes, it was Honorius I in the 7th century. He was posthumously excommunicated from the Church as a heretic. However, his heresies of Monothelism, compared to Bergoglio’s heresies, were like a mosquito bite as compared to the bite of a deadly poisonous snake. But then again, he was followed by true Catholic Popes because the structure of the Church was still truly Catholic. Today, however, when the Vatican is already under the sway of the Masons, i.e. the NWO, a new ecclesiastical structure has been built with a spirit other than that of Christ (cf. Rom 8:9). This whole system ensures that, after Bergoglio, the apostate structure can no longer elect a true Catholic Pope. Therefore, one thing is necessary – to separate from this Bergoglian structure, not only internally but also externally. There is no point in expecting this structure to be revived in the future. Bergoglianism is like the sinking Titanic. The only escape is to board the lifeboats in time and leave the Titanic. This is not the Church of Christ, but a deep church. If you, the current bishops, miss the chance and neglect to take a historic step and lead the people into lifeboats, you will be responsible for all those who will sink in the lake of fire with the Bergoglian Titanic. You must show true repentance! The situation has already been made much easier for you by a brave witness of Christ, who has created an alternative. He is Carlo Maria Viganò, former US nuncio. If only he were joined at least by you, the retired bishops. Bergoglio cannot punish you anymore. Do take this step at least for the sake of your own salvation and in order to set a good example. By separating from a heretic, you will not abandon the Church of Christ; on the contrary, you will make a gesture of faithfulness to Christ and His Mystical Body, His bleeding Church.

What are the options for you?

The first option is to sink with Bergoglio and his synodal journey, while pretending to the last breath that everything is fine. In the Masonic document The Permanent Instruction of the Alta Vendita, Catholics had long ago been ridiculed for believing that they were marching under the banner of Peter’s keys, while marching under the Masonic banner.

The second option is to separate as soon as possible from Bergoglio and his irreversible path to destruction, and to join Сarlo Maria Viganò. Bishop Williamson and Archbishop Lenga also publicly support him. The Polish archbishop has called on the faithful to prepare for the catacombs. He advises them to find a true Catholic priest who would celebrate the Mass for them in their homes, as churches are occupied by the Bergoglian system serving the Antichrist.

Dear bishops, the solution is to choose the second option, because the irreversible changes lead to eternal damnation. The Son of God became man and, through His death, opened the eternal heavens for us. However, those who accept Bergoglio’s irreversible changes, thereby rejecting repentance, will not be saved.

+ElijahPatriarch of the Byzantine Catholic Patriarchate