The Fifth Apparition of the Blessed Virgin Mary

“Continue to say the Rosary to obtain the end of the war.”

For this fifth apparition, people gathered there witnessed a luminous globe in the sky. One pilgrim, although incognito at the time, was a priest named Father John Quaresma, who had made the journey with two fellow priests, Fathers Manuel do Carmo Gois and Manuel Pereira da Silva. In a letter dated 1932, (now Monsignor) Quaresma writes:

“At midday there was complete silence. One only heard the murmur of prayers. Suddenly there were sounds of jubilation and voices praising the Blessed Virgin. Arms were raised pointing to something in the sky. “Look, don’t you see?” “Yes, yes I do…!” There was much satisfaction on the part of those who did. There had not been a cloud in the deep blue sky and I too raised my eyes and scrutinized it in case I should be able to distinguish what the others, more fortunate than I, had claimed to have seen.

“With great astonishment I saw, clearly and distinctly, a luminous globe which moved from the east to the west, gliding slowly and majestically through space. My friends also looked and had the good fortune to enjoy the same unexpected and delightful vision. Suddenly the globe, with its extraordinary light, disappeared.”

Author Frère Michel de la Sainte Trinité adds, however, that other people continued to see the globe, as well as other phenomena:

“It then began to approach the holm oak of the apparition. Then the sun’s brightness diminished, the atmosphere became golden yellow, like the other times. Some people even reported being able to distinguish the stars in the sky. Lucy began to speak.”

--Continue to say the Rosary to obtain the end of the war. In October Our Lord will come, as well as Our Lady of Sorrows and Our Lady of Carmel. Saint Joseph will appear with the Child Jesus to bless the world.

--God is pleased with your sacrifices. He does not want you to sleep with the rope on, but only to wear it during the daytime.

--I was told to ask You many things, the cure of some sick people, of a deaf-mute…

--Yes, I will cure some, but not others, because Our Lord does not trust them.

--The people would like to have a chapel here.

--With half the money make litters to be carried in procession on the feast of Our Lady of the Rosary; the other half is for the chapel.

Author Frère Michel de la Sainte Trinité then relates that Lucy offered the Blessed Virgin two letters and a little bottle of perfumed water that had been offered by a man from the parish of Olival. As she offered them to Our Lady, she said to Her:

--I have been given these things. Do you want them?

--They are not needed in Heaven.

--In October I will perform a miracle so that all may believe.

Then Our Lady began to rise as usual, and disappeared.

“During the time of the apparition the majority of the pilgrims had enjoyed a marvelous spectacle: they saw falling from Heaven a shower of white petals, or round, shining snowflakes which slowly descended and disappeared as they approached the ground.”   (pp. 257-259) 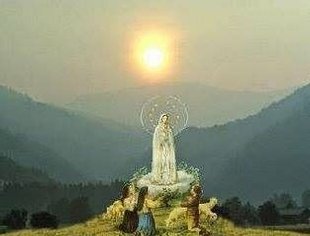