The Fourth Apparition of the Blessed Virgin Mary

“…many souls go to hell because there are none to

sacrifice themselves and pray for them”

The town’s mayor and founder of a local masonic hall, decided to kidnap the three children and take them to his home in Villa da Ourem on August 12, as a way to stop the apparition from occurring on August 13th.

He also wanted to scare the children into telling him the Blessed Virgin’s secret. Toward this end, he removed them to the jail where they were bullied, put into a cell with other prisoners, interrogated, and even threatened to be cooked alive in boiling oil if they did not reveal the secret. The children were terrorized, but they said nothing of the secret to anyone.

So, having failed, this evil man took the children to the priest’s rectory, to see if the priest could get the secret out of them. The children were seen being taken there which created a stir of distrust for the priest, as it made it seem that the priest had had a part in the kidnapping.

But Our Lady’s secret was not revealed, so the mason returned them to their homes early in the morning of Sunday, August 19.

As the children had not kept their appointment with the Lady, they did not expect to see her again and felt very sad.

Lucia writes that, after Sunday Mass, she, Francisco, and his older brother John had gone to pasture the sheep in nearby Valinhos:

“I felt something supernatural approaching and enveloping us. Suspecting that Our Lady was about to appear to us, and feeling sorry that Jacinta was not there to see Her, we asked her brother John to go look for her. . . .

“In the meantime, Francisco and I saw the flash of light, which we called lightning. Jacinta arrived, and a moment later, we saw Our Lady on a holm oak tree.

--I want you to continue going to the Cova da Iria on October 13th, and to continue praying the Rosary every day. In the last month, I will work a miracle so that all may believe. If you had not been taken away to the City, the miracle would have been even greater. Saint Joseph will come with the Child Jesus, to give peace to the world. Our Lord will come to bless the people. Our Lady of the Rosary and Our Lady of Sorrows will also come.

--What do You want done with the money that the people leave at the Cova da Iria?

--Have two litters made. One is to be carried by you and Jacinta and two other girls dressed in white; the other one is to be carried by Francisco and three other boys. The money from the litters is for the feast of Our Lady of the Rosary, and what is left over will help towards the construction of a chapel that is to be built here.

--I would like to ask You to cure some sick persons.

--Yes, I will cure some of them during the year.

(Then, looking sad, Our Lady said:

--Pray, pray very much, and make sacrifices for sinners; for many souls go to hell because there are none to sacrifice themselves and pray for them.)

“And She began to ascend as usual towards the east.” 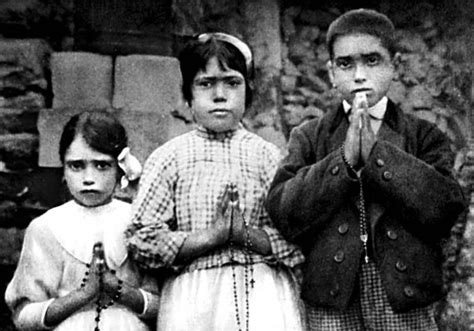 In the Marto family garden, dated some time between July 13th and August 13th. Photo by Father Joachim Antonio do Carmo.