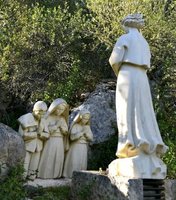 It was morning and the three shepherd children had taken their sheep to the east side of the Cabeço. Lucia writes:

“Around the middle of the morning, a fine rain began to fall, so fine that it seemed like mist. We went up the hillside, followed by our flocks, looking for an overhanging boulder where we could take shelter. Thus it was that we entered for the first time this blessed hollow among the rocks. It stood in the middle of an olive grove belonging to my godfather Anastacio. From there, you could see the little village where I was born, my parents’ home and the hamlets of Casa Velha and Eira da Pedra.

“We spent the day there among the rocks, in spite of the fact that the rain was over and the sun was shining bright and clear. We ate our lunch and said our Rosary. I’m not sure if it was said in the way I have already described, saying just the words “Hail Mary” and “Our Father” on each bead, so great was our eagerness to get to our play! Our prayer finished, we started to play “pebbles”.

“We had enjoyed the game for a few moments only, when a strong wind began to shake the trees. We looked up, startled, to see what was happening, for the day was unusually calm. Then we saw coming towards us, above the olive trees, the figure I have already spoken about. Jacinta and Francisco had never seen it before, nor had I ever mentioned it to them. As it drew closer, we were able to distinguish its features. It was a young man, about fourteen or fifteen years old, whiter than snow, transparent as crystal when the sun shines through it, and of great beauty.

“We were surprised, absorbed, and struck dumb with amazement. On reaching us, he said:

“Do not be afraid! I am the Angel of Peace. Pray with me.”

“Kneeling on the ground, he bowed down until his forehead reached the ground. Led by a supernatural impulse, we did the same, and repeated the words which we heard him say:

“My God, I believe, I adore, I hope and I love You! I ask pardon of You for those who do not believe, do not adore, do not hope and do not love You!”

“Having repeated these words three times, he rose and said:

“Pray thus. The Hearts of Jesus and Mary are attentive to the voice of your supplications.”

“The second apparition must have been at the height of summer, when the heat of the day was so intense that we had to take the sheep home before noon and only let them out again in the early evening.

“We went to spend the siesta hours in the shade of the trees which surrounded the well that I have already mentioned several times (a cistern located at the bottom of the dos Santos family garden; that is, Lucia’s family). Suddenly, we saw the same Angel right beside us.

“What are you doing? Pray, pray very much! The Holy Hearts of Jesus and Mary have designs of mercy on you. Offer prayers and sacrifices constantly to the Most High.”

“How are we to make sacrifices?” I asked.

“Make of everything you can a sacrifice, and offer it to God as an act of reparation for the sins by which He is offended, and in supplication for the conversion of sinners. You will thus draw down peace upon your country. I am its Angel Guardian, the Angel of Portugal. Above all, accept and bear with submission the suffering which the Lord will send you.” (pp. 72-73.)

THE ANGEL’S THIRD APPARITION: AUTUMN OF 1916

On this day the three shepherds had pastured their flocks at the Pregueira, a small olive grove which belonged to the dos Santos, on the south side of the Cabeço. Again, we have Lucia’s written account:

“The third apparition must have taken place in October, or towards the end of September, as we were no longer returning for siesta.

“After our lunch, we decided to go and pray in the hollow among the rocks on the opposite side of the hill. To get there, we went around the slope, and had to climb over some rocks above the Pregueira. The sheep could only scramble over these rocks with great difficulty.

“As soon as we arrived there, we knelt down, with our foreheads touching the ground, and began to repeat the prayer of the Angel.

“My God, I believe, I adore, I hope, and I love Thee…” I don’t know how many times we repeated this prayer, when an extraordinary light shone upon us. We sprang up to see what was happening, and beheld the Angel. He was holding a chalice in his left hand, with the Host suspended above it, from which some drops of blood fell into the chalice. Leaving the chalice suspended in the air, the Angel knelt down beside us and made us repeat three times:

“Most Holy Trinity, Father, Son, and Holy Spirit, I offer Thee the most precious Body, Blood, Soul, and Divinity of Jesus Christ, present in all the tabernacles of the world, in reparation for the sacrileges, outrages, and indifference by which He Himself is offended. And through the infinite merits of His most Sacred Heart, and the Immaculate Heart of Mary, I beg of Thee the conversion of poor sinners.”

“Then, rising, he took the chalice and Host in his hands. He gave the Sacred Host to me, and shared the Blood from the Chalice between Jacinta and Francisco, saying as he did so:

“Take and drink the Body and Blood of Jesus Christ, horribly outraged by ungrateful men! Make reparation for their crimes and console your God.

“Once again, he prostrated on the ground and repeated with us, three times more, the same prayer “Most Holy Trinity…” and then disappeared.

“Moved by a supernatural force which enveloped us, we had imitated the Angel in everything, that is, we prostrated as he did and repeated the prayers that he said. . .

“We remained a long time in this position, repeating the same words over and over again.

“It was Francisco who realized that it was getting dark, and drew our attention to the fact, and thought we should take our flocks back home. . . .”

Lucy insists again this time on the state of physical exhaustion in which the angelic apparition plunged them:

“In the third apparition, the presence of the Angel was still more intense. For several days, even Francisco [who had never heard the Angel, only seen him] did not dare to talk. He said later on, “I love to see the Angel, but the trouble is that later on, we are incapable of doing anything. I could not even walk any more, I didn’t know what was the matter!” (pp. 75-77) 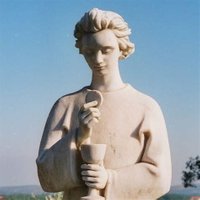 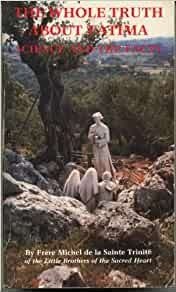