The Third Apparition of the Blessed Virgin Mary

“Sacrifice yourself for sinners”

The parish priest, Father Ferreira, voices his doubt about the authenticity of the apparitions:

“It doesn’t seem to me like a revelation from Heaven. It usual in such cases for Our Lord to tell the souls to whom He makes such communications to give their parish priest or confessor an account of what has happened. But this child, on the contrary, keeps it to herself as far as she can. This may be a deceit of the devil. We shall see. The future will show us what we are to think about it all.” (p. 172)

This pronouncement from her priest brings doubt into Lucia’s heart and she suffers greatly during the rest of weeks leading up to July 13. Lucia writes:

“The 13th of July was close at hand, and I was still doubtful as to whether I should go. I thought to myself: “If it’s the devil, why should I go to see him? If they ask me why I’m not going, I’ll say that I am afraid it might be the devil who is appearing to us, and for that reason I’m not going. Let Jacinta and Francisco do as they like; I’m not going back to the Cova da Iria any more.”

Jacinta and Francisco pleaded with Lucia, but she was determined to not go. Then, on the day of July 13, Lucia feels impelled to go. She writes:

“On the following day, when it was nearly time to leave, I suddenly felt I had to go, impelled by a strange force that I could hardly resist. Then I set out, and called to my uncle’s house to see if Jacinta was still there. I found her in her room, together with her brother Francisco, kneeling beside the bed, crying.

“Their faces lightened up with joy, and they set out with me. Crowds of people were waiting for us along the road, and only with difficulty did we finally get there.”

For this apparition, it is Lucia who alerts the crowd that the Blessed Virgin Mary is coming, as Jacinta and Francisco’s father, Mr. Marto, writes:

“And so I got to my little Jacinta. Lucy was kneeling a little way off saying the Rosary which the people were answering aloud. When it was finished she got up so quickly that it seemed as if she were pulled up. She looked to the east and then cried out: “Shut up your umbrellas,” (used for the sun), “Our Lady is coming!” I looked as hard as I could but I could see nothing.”

« Lucy looked at the vision without daring to speak to it. Then Jacinta intervened: “Come on, Lucy, speak! Don’t you see that She is already there and wants to speak to you?”

And so, as Lucia writes, she finally speaks to the Apparition:

--I want you to come here on the 13th of next month, and to continue praying the Rosary every day in honour of Our Lady of the Rosary, in order to obtain peace for the world and the end of the war, because only She can help you.

--I would like to ask you to tell us who you are, and to work a miracle so that everybody will believe that you are appearing to us.

--Continue to come here every month. In October, I will tell you who I am and what I want, and I will perform a miracle for all to see and believe.

“I then made some requests, but I cannot recall now just what they were. What I do remember is that Our Lady said it was necessary for such people to pray the Rosary in order to obtain these graces during the year.

--Sacrifice yourselves for sinners, and say many times, especially when you make some sacrifice: O Jesus, it is for love of Thee, for the conversion of sinners, and in reparation for the sins committed against the Immaculate Heart of Mary.

“As Our Lady spoke these last words, She opened Her hands once more, as She had done during the two previous months. The rays of light seemed to penetrate the earth, and we saw as it were a sea of fire. Plunged in this fire were demons and souls in human form, like transparent burning embers, all blackened or burnished bronze, floating about in the conflagration, now raised into the air by the flames that issued from within themselves together with great clouds of smoke, now falling back on every side like sparks in huge fires, without weight or equilibrium, amid shrieks and groans of pain and despair, which horrified us and made us tremble with fear. (It must have been this sight which caused me to cry out, as people say they heard me.) The demons could be distinguished by their terrifying and repellent likeness to frightful and unknown animals, black and transparent like burning coals.”

“Terrified and as if to plead for succour, we looked up at Our Lady, who said to us, so kindly and so sadly:

--You have seen hell, where the souls of poor sinners go. To save them, God wishes to establish in the world devotion to My Immaculate Heart. If what I say to you is done, many souls will be saved and there will be peace. The war is going to end, but if people do not cease offending God, a worse one will break out during the reign of Pius XI. When you see a night illumined by an unknown light, know that this is the great sign given you by God that He is about to punish the world for its crimes, by means of war, famine and persecutions of the Church and of the Holy Father.

--To prevent this, I shall come to ask for the consecration of Russia to My Immaculate Heart, and the Communion of Reparation on the First Saturdays. If My requests are heeded, Russia will be converted and there will be peace; if not, she will spread her errors throughout the world, causing wars and persecutions of the Church. The good will be martyred, the Holy Father will have much to suffer, various nations will be annihilated.

--In the end, My Immaculate Heart will triumph. The Holy Father will consecrate Russia to Me, and she will be converted, and a certain period of peace will be granted to the world.

--In Portugal, the dogma of the Faith will always be preserved; [and now Our Lady gives the three children the Secret.] Do not tell this to anybody. Francisco, yes, you may tell him.

--When you say the Rosary, say after each mystery: O my Jesus, forgive us, save us from the fires of hell. Lead all souls to Heaven, especially those who are most in need.”

“After this, there was a moment of silence, and then I asked:

--Is there anything more that You want of me?

--No, I do not want anything more of you today.

“Then, as before, Our Lady began to ascend towards the east, until She finally disappeared in the immense distance of the firmament.” 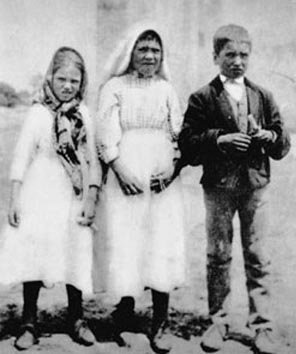 Jacinta, Lucia, and Francisco immediately after their July 13, 1917 apparition where the Blessed Virgin Mary showed them Hell.